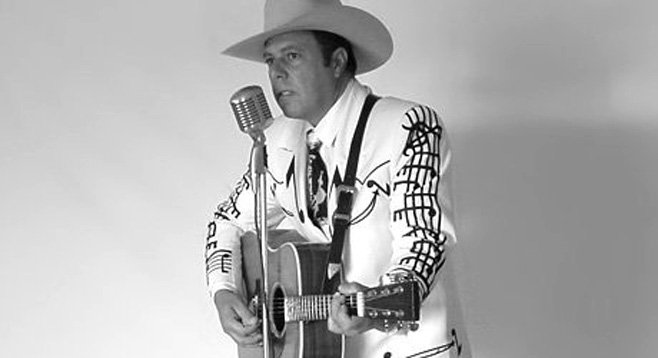 The Hank Show plays the music of Hank Williams, fronted by “Cowboy Jack” Johnson. According to the longtime San Diegan (since 1968), “It’s a re-creation, not a tribute, of the music of Hank Williams Sr. We’ve been doing hits from the breadth of his career. He recorded from ’47 to ’53, and we play the songs in chronological order. The band wears vintage smile-pocket Western shirts with hats and ties, and we all play instruments accurate to that era.”

Johnson’s guitars are identical to those favored by Williams, while his bandmates use the same style hollow-body electric guitar, steel guitar, fiddle, and upright bass used by their Sr. inspirations.

“My Hank suit was made for me by one of the same guys who tailored Hank’s clothes,” Johnson says. “He was one of the guys at Nudie's Rodeo Tailors [who dressed ZZ Top, among others], and he made me a replica of Hank’s suit…the white suit with black musical notes.”