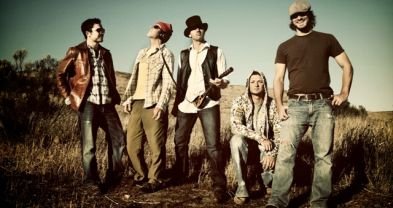 “Two of us are lab-coat-wearing PhDs at Scripps Institute of Oceanography,” says Traer. “Mike [Pritchard, singer-keyboardist] works in the climate research group, building computer models to simulate cloud formation and understand the role that clouds play in the global climate system. I work in the marine physical lab, studying the physics of sound propagation in the ocean and developing technologies to map the ocean and oceanic crust using ambient noise.”

The math rock-inclined band often uses electronically sampled scientific material, including vintage quantum physics lectures. “Mike obtained some audio recordings of Caltech physicist Richard Feynman from the early 1960s. Feynman was known as one of the greatest minds who ever lived, while simultaneously being a professional percussionist in Latin jazz bands.… In our live set, Feynman’s voice punctuates instrumental music sections with bold statements about patterns and symmetries in the observable universe.

“In the future, we hope to incorporate sound clips I recorded from the ocean — whales, underwater landslides, hurricanes. I also have a pipe dream of writing some adaptive-filter computer algorithms to create custom effects boxes, like a distortion pedal that changes the characteristics of the distortion in response to the tempo of the music.”