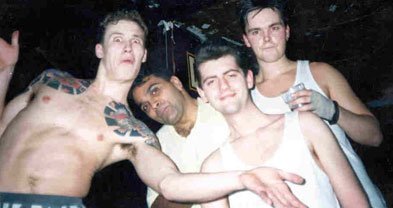 Influences: The Stray Cats, the Polecats, the Cramps, the Meteors, the Stingrays

“We always had a strong cult following,” says Bowler, who didn't join until quitting Get Smart in 1987. “We’d tour Europe about nine times a year. I was 15 when the Stray Cats came over. The punks used to fight the rockabillies before 1981. The two scenes merged in the early ’80s.”

They released a self-titled EP in 1983 with singles like "You’re So Fine," "Rockin’ In My Coffin," "Jungle Rumble," and "Guana Rock." More singles followed in 1984, including "The Cave" b/w "Werewolf Blues," the latter still one of the most popular psychobilly numbers ever recorded.

According to Bowler, the psychobilly scene died when Klub Foot closed in 1988. “That’s when the Manchester DJ scene came in and kind of took over. Bands weren’t happening as much. The crowds started to thin out. The venues disappeared.” The band broke up in 1990.

Hancox moved to North County in 1992 and Bowler followed four years later. Both started families and played locally on occasion. “We slowed right down. We’d play maybe four or five times a year. But we would go back to England to play reunion shows.” The first of those reunions happened in 1996.

In 2001, the duo formed a rockabilly band called Bonneville 7, “…but Pip lost interest. He had a very short attention span back then.” That band continued without them, while Hancox and Bowler went on to occasionally play with ex-Stray Cats members under the name the Guana Cats.

In April 2008, the reunited Guana Batz played a sold-out Belly Up show opening for Mike Ness. The following month, the Escondido band accepted an opening slot on two dates of Rancid’s upcoming fall tour. Johnny Bowler admits that the band nearly passed on this career surge.

Three years previous, singer Nick 13 of locals Tiger Army had his agent see about resurrecting the Guana Batz to play with them at the Wiltern in L.A. Batz lead singer Pip Hancox rejected the offer: "Who is this Tiger Army?” he asked. After Tiger Army headlined the Warped Tour and asked the Guana Batz again, they said yes.

As of 2018, the duo's U.S. backing band included guitarist Gino Meregillano, who formerly played with Whole Hog, and drummer Alex Pappas, formerly of Finch. “He was born a year before the band,” says Bowler. By the time their Back to the Jungle album was released, Pappas had been replaced by Jared Hren of Off Track.