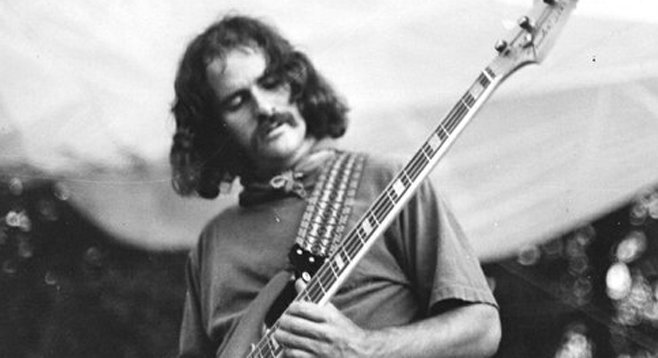 Greg Willis' history as a bass player goes back decades in San Diego. He first rose to fame as one-half of the rhythm section behind Iron Butterfly (Jack Pinney played drums), a band that started in San Diego before moving north to Los Angeles.

Later, Willis and Pinney would reunite in another local band called Glory, and then the Shames, both of which featured a young guitar slinger (and future Beat Farmer) named Jerry Raney.

Willis also played in the King Biscuit Blues band and in the Mississippi Mudsharks before delving into a career as a side man that saw his familiar overall-clad figure on stage with dozens of local artists.

After the stroke happened in his sleep, "I couldn't stand up. I couldn't say words."

Patty Birchard, his girlfriend, tried to help. "He tried to get up and get dressed, and he couldn't." That's when she called her dad. He had a van. They would need to use it to get Willis to a hospital.

Willis spent the next three days at Mercy Hospital in Hillcrest. After, he was transferred to a physical rehab center near Alvarado Hospital for another two weeks. Therapists there helped him to learn how to walk, talk, and dress himself all over again.