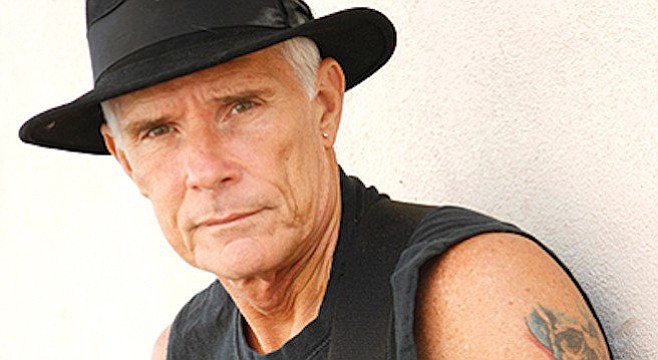 Sound description: Classic rock by a guy who was there the first time, with lots of acoustic finger style and slide guitar.

You may not be familiar with guitarist Greg Douglass, but you’ve probably heard him play. He performed on Greg Kihn’s single “Jeopardy” (1983), and he’s toured and recorded with Van Morrison, Duane Eddy, Link Wray, Hot Tuna, Dave Mason, and Eddie Money, among others. In addition, he cowrote and played on the Steve Miller Band hit “Jungle Love” (1977).

"I'm not even sure where ['Jungle Love'] fits into the Everybody Loves Raymond mythology," laughs Douglass. The tune was used as the theme song for the final three seasons of the TV sitcom.

With Steve Miller Band bassist Lonnie Turner, Douglass wrote "Jungle Love" as a demo for British guitarist Dave Mason. "Instead, the song turned into Dr. Seuss on acid," and Miller opted to include it on his next album. Douglass was asked to join the group after Miller had trouble duplicating his riff in the studio.

Douglass admits that "Jungle Love" was the second attempt to recycle the tune's signature guitar part.
"It was used by [my mid-'70s trio] Mistress; I wrote a song called 'Paul' that used the same riff. And I also tried it while I was in Hot Tuna in a co-write with Jorma Kaukonen, but it never really gelled."

Released as a single in 1977, "Jungle Love" was an instant hit, though "It only reached number 22," says Douglass. "At the time, it was a little disappointing. But the song has been very good to me ever since...it helped buy my house."

The song is included on numerous Miller compilations, including Greatest Hits 1974-1978, the 35th-biggest-selling album of all time (13 million copies sold). "I probably have naked pictures of your mom from my days as a rock star."

In response to observations that many feel "Jungle Love" is a horrible song, representing a low point in the Miller catalog, Douglass says "I think 'dumb' and 'overtly commercial' would be more apt. It continues a tradition that starts with 'The Joker,' which Steve wrote deliberately to be dumb and overtly commercial in response to Capitol's demands that he stop this high-falutin' artsy-fartsy stuff and write a hit single. My former boss set out to write the stupidest, catchiest nonsense possible -- 'WEEEEET-woooooo!' -- and succeeded admirably."

"I too was a huge fan of Steve's early work, and scratched my head when 'The Joker' came out, but grew to enjoy it. I have made an enormous amount of money from 'Jungle Love,' and was responsible for the music-guitar parts only, both of which still kick serious ass. And I sleep more peacefully at night knowing I didn't write 'Abracadabra.' Hey, it takes a little horseshit to grow a rose. Now go listen to Children of the Future and relax."

Many don't realize that, before the Miller band, Douglass did a stint with a certain Jefferson Airplane spinoff in 1975. "I was a member of Hot Tuna for a about a year, an ultimately failed experiment in adding a second guitarist. There were some grand musical moments but, in the end, the chemistry wasn't there. I was butt-hurt for a good long time over my sacking but, in retrospect, it was a combination of musical and personal issues that facilitated my exit. Better things happened."

"Had I stayed with Tuna, there would be no Steve Miller on my resume, no quarterly checks for 'Jungle Love,' and no Rock and Roll Hall of Fame.

Douglass moved to the San Diego area in 1992. “I’m currently living in a big, beautiful house out in Lake Hodges, in the Del Dios-Escondido area,” he said at the time. “We survived the fires, and it’s lovely here. It’s like Mayberry on acid.” Though he could probably live off the royalties from “Jungle Love,” Douglass remains one of the county’s busiest musicians.

“My musical plate is so full, it’s unreal,” he says. “I do solo finger-style gigs, concerts, weddings, funerals, dogfights — you pay, and I’ll play.” Among his current ensembles: the Fabulous Pelicans wedding band (“We get paid elephant bucks for traveling to exotic locations”), surf rockers Mo’ Wasabi (“I’m a Ventures junkie”), and the Monsters of Classic Rock, whose members have played with AC/DC, David Bowie, Rod Stewart, and Huey Lewis. One frequent Monster is guitar heavyweight Rick Derringer. “Going toe-to-toe with Rick and surviving made me happy to have been born,” says Douglass. “Lovely guy, too.”

In addition, Douglass has also played with Quicksilver Gold, a tribute to the music of Quicksilver Messenger Service led by Joli Valenti, son of Dino Valenti, the band's late lead singer.

Douglass also has instructional DVDs available from http://www.iconsofrock.com, one on lead guitar and one on fingerstyle guitar. He has released solo CDs such as The Natives Are Restless and a Christmas collection, Holiday Classics.

On July 9, 2010, at Pechanga, Douglass played “Jungle Love” onstage with Miller for the first time of around thirty years. Douglass says, “I was strictly there as just another middle-aged guy taking his wife on a date.”

After the first encore, “My wife Jeri wondered aloud why they hadn’t played ‘Jungle Love.’ Just as I was beginning to take that personally, Steve started talking about how the song came to be recorded. He then announced that the writer of tune was in the audience and asked me to stand up! I stood and waved, the spotlight hit me, and Steve said, ‘Well, get on up here and play your song!’ I ran up onstage and, two minutes after being just another guy in the crowd, I was playing ‘Jungle Love’ with the band for the first time in 30 years. The audience went nuts...my wife was in total shock.”

Backstage after the show, “I told Steve, ‘Christ, I come to the show trying to enjoy a quiet night off, and you make me work!’ Slave-driving bastard!”

Douglass was involved in a car accident on December 17, 2011, while driving home from a gig and another vehicle hit him. He reported only minor injuries, though his car was totalled.

"We're all really f#cking old, we're playing kick-ass historically important music, and chances are pretty good someone won't survive," he told the Readeron the eve of his departure.

The group first came together in late 2011 to do a west coast tour backing up former Country Joe & the Fish member David Bennett Cohen, who had a new solo piano album out.

"We didn't draw huge crowds, but the reaction was amazing and there were a lot of videos made of the shows. One made its way to a promoter in the UK, and a tour was booked incredibly quickly." The Former Members left for London on September 30, 2011 and then rehearsed at a stone cottage in Wales, where the tour started October 3.

"Four raping and pillaging -- well, pillaging at least -- maniacal old lunatics crammed into a van full of equipment and cases of Dependz. Several shows are sold out already. The old cliche about Europeans appreciating American musicians, especially those who have carved out relatively successful careers while coloring outside the lines, is absolutely true. My email has been swamped with questions about setlists, and there's an amazing amount of anticipation."

Douglass promises that every person in the band is at the top of their musical game. "But the BEST part of this endeavor is that I'm finally the youngest guy in the band!"

He returned to San Diego on October 18, to begin his second year as resident guitarist at Tuscany Restaurant in La Costa. The Former Members toured the UK in May 2013, followed by European dates with an organization called Listen for Life, playing Germany, France, Switzerland, Spain, Italy, Hawaii, and Asia.

In early 2016, Douglass was at Earthling Studios recording with Mike Kamoo (The Loons) at the board, with Skelpin fiddler Patric Petrie originally contributing to several songs (though her tracks were ultimately scrapped). For the album cover, he commissioned legendary cartoonist and dinosaur illustrator William Stout.

In late 2016, when Daring Greatly guitarist Brandon Haddow got stuck back in their Canadian homeland due to immigration issues, the group closed out 2016 touring with Douglass, who played with the band for both Daring Greatly sets and for Steve Miller tribute performances as the Pompatous of Love.

In early 2017, Daring Greatly won a contest to open for Bon Jovi in Las Vegas on February 25, with Douglass on guitar. "Tons of Daring Greatly's fans had travelled to see them one last time before they had to leave the country for immigration reasons," Douglass told the Reader. "The band was tight and we killed it. We walked off the stage exactly twenty minutes after we walked on, making the Bon Jovi folks very happy."

"Later, when I shook Bon Jovi's hand, he asked how it went. 'Well, we didn't get killed,' I said. He frowned and said 'What's that supposed to mean?' I said 'You have really nice fans who treated the opening act with respect,' scrambling to throw dirt over my inadvertently cynical remark. Jon moved on. I hugged all the enormously talented guys I'd ridden so many miles with and told them truthfully what a great pleasure it had been playing music with them."

"Then I piled all my stuff onto my trusty mini-dolly, headed out the back door, and caught a cab to my room at the MGM Grand. I missed Bon Jovi's set, but the television in our room was first rate. My dreams that night were utterly devoid of grumpy old fuck-ness and full of future plans that would have been unthinkable a month earlier. Daring Greatly indeed."

In summer 2017, Douglass booked a month-long theater tour in the UK for the following January with his Steve Miller tribute band, the Pompatous of Love. "A tribute band with an original member in it is an easy sell, especially across the pond."