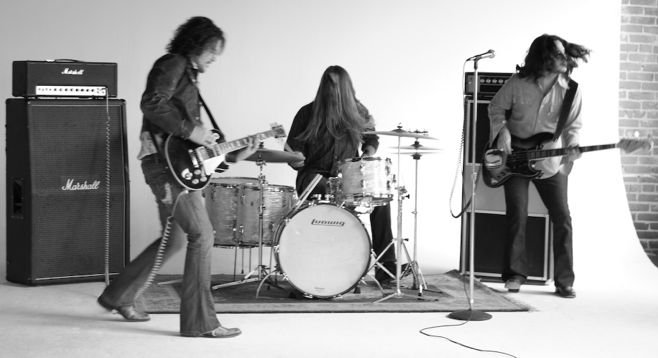 With a loose, joyous, and somewhat reckless spirit, the Grass Heat brings the backyard party to the main stage. As for their name, “I think it just sounded cool,” says Chris Torres, the Heat’s bassist and singer. The band made columns of words on a page and connected them with lines. “The” and “grass” and “heat” made the winning combination.

“We wanted something trippy and cool,” says guitarist Billy Joe Clements (also of Billy Joe and the Roosters and Diesel Billy).

The two musicians are a study in contrast. Torres, with Zen-like calm, scribbles lyrics and hums in the North Park home Clements shares with his wife, dog, and cats, while Clements picks out leads on an unplugged Stratocaster and paces the room. “We come together on the old stuff,” says Torres.

Their raw-natured, whiskey drinking, back-to-basics approach delivers high energy, good songs, and good times. You get a sense of loud just from the cover art on their debut CD. The three (including Mike Stone on drums) look as if caught in the blast of some mammoth speakers. The image paints a picture, but it’s not of the band’s entirety.

32 years old in 2012, Torres was living in Carlsbad and gainfully employed by Kris Allen, the 2009 American Idol winner. In 2013, Clements launched his side band Diesel Billy. “I came up with a new idea,” he says. “1960s truck driving stuff. The demos sound country, but live, it'll be more rockin'.”