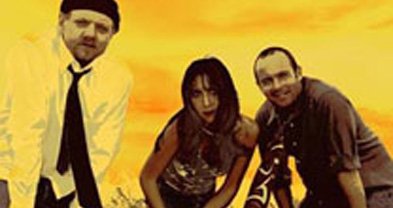 "We got our name from the notion about how the human body loses a total of 21 grams weight upon death and how this is attributed to the weight of the soul leaving the body," says Chuck Schiele, guitarist/singer/songwriter for the Grams. "I constantly discuss soul matters in my lyrics, so when we heard that notion we knew we were about to sniff out our new name. We were drinking beer at a gig when it came to us."

Elise Ohki, aka Sweet Elise, reinvents classical violin by way of experimentation and signal processing. Her husband Craig Yerkes (whose sister Marcia Claireis another local musician) is the band's lead guitarist. Together, they take a pop-rock-Americana-world-music approach to songwriting. Equal parts orchestration/improvisation, with the overt use of only two acoustic guitars -- in a variety of virtuostic styles and situations -- along with the effects-driven space violin, they create a heady blend unique unto themselves that is not only melodic, but very rhythmic. After all, hitting the guitar is part of the fun in the Grams.

Their debut self-titled CD was released in March 2006, co-produced by Chuck Schiele & Jeff Berkley, written by Schiele and arranged by the Grams. The band won a 2006 San Diego Music Award as "Best Americana Group" and a 2007 award for "Best Americana or Country."

Schiele has also been an integral part of bands such as the Gandhi Method, Modern Peasants, and Chuck Schiele and the Mysterious Ways. He runs STUDIO B, a full-service recording facility, and is currently producing several projects, including Podunk Nowhere and Johnny Different.

Schiele and his wife also promote local events such as Beach Music Mafia, which books local venues and events like the Ocean Beach Street Fair and the O.B. Chili Cookoff .

In addition, Schiele has been promoting New York City shows, many featuring San Diego acts. "New Yorkers really like San Diego music," he says. "They came. They clapped. They bought CDs. All the New York musicians have the impression that we have a very healthy music scene."

Sadly, lead guitarist Craig Yerkes was killed in a June 2008 traffic accident. The band debated whether to continue, eventually resurfacing in November, 2008, to perform at the San Diego Bay Wine & Food Festival, with local player Clay Colton sitting in.