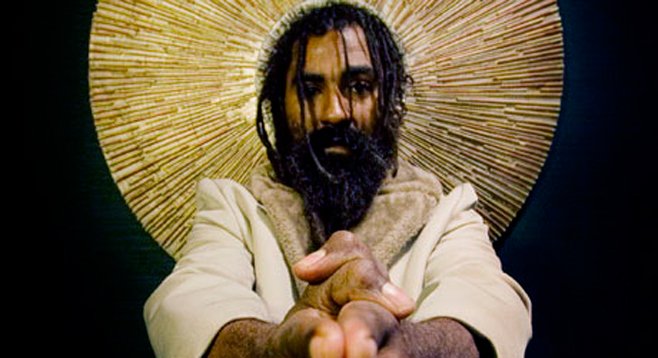 San Diego-born Sumach Valentine Ecks -- aka Gonjasufi -- specializes in psychedelic-tinged hip-hop. Raised by a Mexican mother and an American-Ethiopian father (who was one of San Diego's first black court judges), he first earned local notice with Masters of the Universe and Gaslamp Killer.

After singing the track “Testament” on Flying Lotus’ Los Angeles album, he was signed to UK label Warp Records, which released his debut A Sufi and a Killer in 2010. Next came a remix album, The Caliph’s Tea Party, with new mixes by Broadcast and the Focus Group, Mark Pritchard, Oneohtrix Point Never, and Bibio.

In 2011, 32 year-old Gonjasufi moved near Las Vegas. His EP Mu.zz.le came out January 24, 2012, co-produced with touring bandmate Psychopop and released digitally, on double 10-inch vinyl, and as a limited screenprinted poster with download code at select record stores.

He describes the EP as “A way to reflect on my actions. It’s very emotional and dark, the record. It’s been a dark time of my life, probably the darkest, but I’ve been able to maneuver through that and turn the darkness into light.”