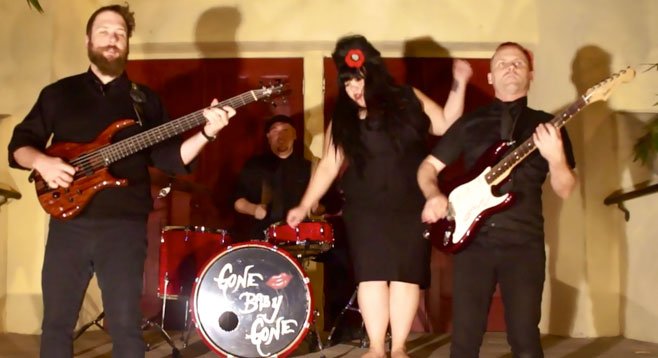 Members included Veronica Collins (aka Dizzy), David Johnson (aka Trips), and Jaime Jurado (aka Sgt. J ) when a self-titled full-length was released in 2012, followed up in early May 2013 with a ten-song CD. “The album is DIY, baby,” says Dizzy. “Self-released...we don’t have label support yet. It’s a formal 2013 release of our first full-length CD, with artwork, track listing, pics, and thank yous. Some would say it’s a re-release, because most of the songs are basically the same garage recordings we recorded as a band, but they’ve been professionally mastered and mixed down. I guess you can say they’re more radio-friendly versions of our current songs than you can hear when you come to see us live...a complete ten-song album with newly added number ten, a new song titled ‘Stuff (Forget Him).’”

Available as an online download and on disc, the CD version also comes with a “secret” bonus. “There’s a hidden live track of an Eric Burdon and the Animals cover, ‘House of the Rising Sun,’” says Dizzy. “It was literally our first time performing it, recording it at a band rehearsal in a garage. It’s somewhat gritty, and you can feel the emotion and inflections throughout the song. Later, we actually recorded a pro-mastered and -mixed version of it, but decided against releasing it.” The “pro” version of “Rising Sun” has been broadcast on Tim Pyles’s local-music radio show on FM94/9.

The album cover art depicts the players as Archies-like cartoon characters, kicking up their mod heels on a concert stage. “Basically, it’s all about my long-unrequited crush on the Affleck Brothers — mainly Casey — and our love of chocolate peppermint with the colors black, red, and white. The cartoons are just cooler versions of us....

“I always wanted to be a cartoon. And a Barbie. Dreams do come true.”

As of early 2014, the band's lineup was Veronica Collins aka Dizzy (vocals), David Johnson aka Sgt. Jay (lead guitar), Giovanni Gomez aka Law (rhythm guitar), Jaime Jurado aka Trips (bass), and Craig Hoffman aka Jonesy (drums). By summer, Jurado had been replaced by Wyatt Daniels.

Two EPs were released in late summer 2014. You Think You Know, But You Have No Idea was made available as a CD and digital download, featuring four songs (including a duet with Pat Beers of Schitzophonics) plus a hidden track. Under Covers (three covers and a hidden number) was released as a free download on Reverbnation before appearing on CD in October.

Their next full-length Love Stories was released in April 2016.