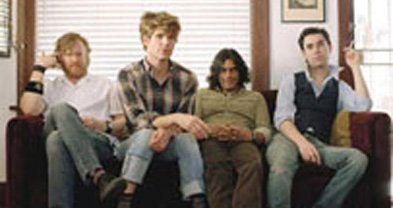 RIYL: The Replacements, Rocket from the Tombs

Gogogo Airheart was launched in 1996 by Mike Vermillion and Ashish Vyas. Local indie label Vinyl Communication signed the group, and they recorded their self-titled debut LP in 1997, with drummer Andy Robillard and violinist Teri Hoefer.

Their 1998 album Love My Life, Hate My Friends delved deeper into punk waters. The following year, they signed a record deal with Touch & Go subsidiary Overcoat and released The Things We Need EP, featuring guitarist Benjamin White and temporary drummer Jimmy Lavalle (of Tristeza and the Album Leaf) replacing the departed Hoefer and Robillard.

Their third LP -- self-titled again -- was on the Southern California indie label GSL, while 2002’s album was called Exit the UXA. After a European tour supporting this album, guitarist Benjamin White left the band, while temp drummer Lavalle moved on and Robillard soon returned on percussion. Fall 2004 saw White return to play on their 2005 GSL album Rats! Sing! Sing!

In summer 2006, rumors circulated that the band was splitting up. “Yes, it is true, we have broken up,” said drummer Andy Robillard on the band’s MySpace blog. “At least I can say without any reservations whatsoever that we never put out a shitty record, and we never sold out to the Man."

“[Money was] the biggest problem with being in this band and most likely many other bands out there,” bassist Ashish Vyas told Pitchforkmedia.com. "Everyone who had a job quit before the U.S. tour in February. We didn't come home with any money, and that reality, which we were aware of at the start of the European tour, fueled our decision to stop this band."

The band’s last gig was at the Casbah on May 22, 2006. Mike Vermillion moved to Long Beach to play guitar with area bands, while guitarist Ben White relocated to L.A. to DJ at the Echo on Sunset Boulevard. Drummer Robillard remained gigging in San Diego, while Vyas spent much of 2006 touring with Thievery Corporation. There are no plans to issue unreleased tracks recorded in 2003 with John Reis (Rocket from the Crypt).

As of 2009, bassist Ashish Vyas is living in Washington D.C. and playing with Theivery Corporation as well as Rob Garza's solo project.

Vocalist/guitarist Mike Vermillion is playing with a band in Long Beach called the Deadly Finns.

Drummer "Cap'n" Andy Robillard is playing with San Diego-based UV Tigers and Rafter, as well as his own jazz quartet called the Andy Robillard Quartet, and also with a very authentic Johnny Cash cover band called Cash'd Out.