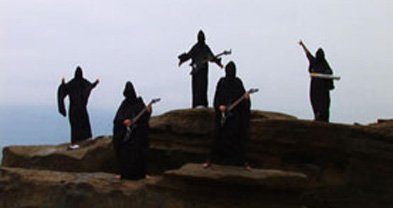 Obscured by fog and black-hooded gowns, Goblin Cock tore through its debut show at the Casbah on August 20, 2005, releasing their debut Bagged and Boarded on October 25.

Crow's project was planned from the start include a string of videos and comic books that tell the story of his alter ego's birth. "Phallus" says he doesn't listen to much contemporary music. "I'm mostly steeped in the classics, like Manowar, Thor, and Venom."

"It's inferred they are all lesbians," says Hoyt, who found his softball team at the Golden Hill Rec Center. "They were non-actors. I thought they would realize some of the inherent comedy. But they were stone-faced during most of the shooting. I was put in the precarious position of having to be the guy who tells the lesbian softball team what to do. When I asked them to chew gum and look tough, I realized they didn't have to act."

In the video, a fight breaks out between the Grim Reaper-looking Goblin Cocks and the softball team.

"The fight scene climaxes at a dead-end street in Hillcrest," says Hoyt. "Two robots suddenly emerge, holding a child hostage. The two groups merge to battle the robots and free the child."

Hoyt used to manage and book the all-age Soul Kitchen club in El Cajon ('94-'97). He graduated from San Francisco State University with an English degree. At SDSU, he earned a master's degree in film; his thesis was a film based on the Black Heart Procession's Amore Del Tropico CD.

Rob Crow's Robcore label has also released Goblin Cock's Come with Me if You Want to Live (he also plays in Other Men), as well as new records by Optiganally Yours (Crow's band with Pea Hicks) and Aspects Of Physics. A new album was released in 2016 via Joyful Noise, Necronomidonkeykon.