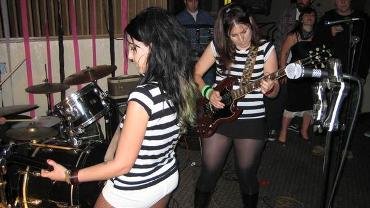 RIYL: The Headcoatees, the Gories, Fuzzbox, Girlschool, L7, the Muffs

When the Glossines came together in summer 2001, Kristin Warnken had just left the band Dizzy, for whom she played guitar (she’s also a drummer now). Bassist Amber Everson was a go-goth dancer at Sabbat, a cult club gathering for the city’s darkly dressed. Various other members have come and gone, including cofounding guitarist Nina Reynolds. “Kristen and I are the only full-time members,” says Everson. “We have a handful of different people who play drums for us in concert settings.”

The band’s debut CD captures a rough-edged garage-band sound with 1960s girl-group harmonies and grungy guitars. Musically and visually, the group aspires to be part Bangles and part Josie and the Pussycats. Not that being “all-girl” is that noteworthy anymore, in Warnken’s opinion. “We’ve got nothing to compare this to, as we have always been girls, and there is no difficult aspect. We just happen to be girls. So, there.”

They sent CDr copies to radio stations and promoters all over the U.S., as well as to British DJ John Peel, who had been on BBC Radio 1 since its launch in 1967. From Top Gear through his nightly program The John Peel Show, the one-time radio pirate has helped to launch hundreds of artists since his days debuting the early singles of Pink Floyd and the Yardbirds.

“In December of 2002," says Warnken, "we sent our full record with twelve songs via air mail to John Peel, because most DJs are puppets and can’t play what they like. Mr. Peel is not a puppet, he’s a great DJ and we like him.”

The sixty year-old Peel found something appealing about the CDr and, beginning on December 10th, began playing tracks like “Cornbread” and “Too Much” from time to time on his nightly BBC Radio 1 program. “We found out that he was playing our record from the avalanche of emails from the U.K. asking to buy our record because they heard it on John Peel,” says Warnken. “We were stoked out of our heads. We got some fans, and we sold some records...He also named our record in his best of list for December 2002.”

Warnken is a Leo who likes fast cars and fast boys, and her favorite TV show is Elimidate. Everson is a Capricorn who likes Corvettes and kisses. Nina Reynolds and Katie Brouillard are no longer with the group.