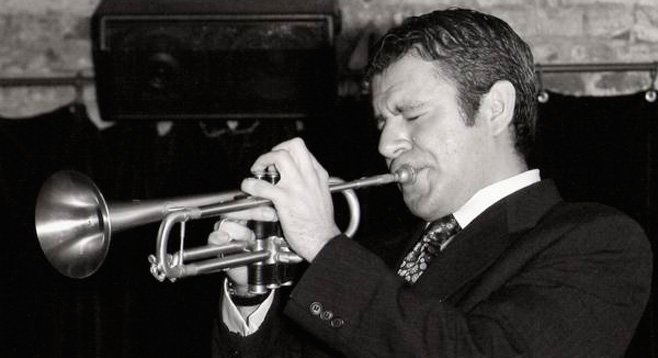 Born in Guadalajara, Mexico, trumpet whiz Gilbert Castellanos first earned local cred with the Charles McPherson quintet. He attended Berklee College of Music in Boston, and then Cal Arts in Los Angeles. He replaced the original trumpeter in the bebop band Black/Note, which recorded an album for Columbia Records (Jungle Music, 1993) and two more for other labels before splitting.

Spin magazine has called Castellanos San Diego’s best trumpeter. He moved to San Diego in the mid-1990s, soon hosting weekly live jazz jam sessions at Ole Madrid, beginning in 1995. For him, those jam sessions were school. “Back then, I was the one who was getting my stuff together and figuring out how to play jazz and all that stuff.” He was frequently seen playing clubs like the San Diego jazz venue Anthology with his Trumpet Summit band, founded in 1999, which features three trumpets with an Afro-Cuban rhythm section.

The weekly jazz jam later moved to the Onyx Room, and then El Camino (formerly the Airport Lounge) on India Street, beginning in January 2010. “The whole purpose of running the jam session for me is a community service, actually, to let people come out and share the stage with musicians in my group and, hopefully, to inspire the musicians of a younger generation to continue playing jazz.” In December 2012, the Wednesday Night Jam Session moved to Seven Grand at 3054 University Avenue in North Park (formerly Bacchus House).

He kicked off the new Athenaeum series Night of the Cookers: Tribute to Trumpet Masters on June 14, 2011, at the Athenaeum in La Jolla, with special guest trumpeter James Zollar (a former San Diegan). Early the following year, he began working with the San Diego Repertory Theatre on a theatrical production about San Diego’s jazz history.

The Wednesday Night Jam Session, formerly held at El Camino in Little Italy, resumed December 12, 2012, at Seven Grand, running 9pm to midnight. “I will have alternating bands hosting the session every other week,” said Castellanos. “Jazz one week, Latin jazz the other.” The San Diego branch of L.A.-based Seven Grand is located at 3054 University Avenue in North Park (formerly Bacchus House).

He performed a tribute to Quincy Jones at the Hollywood Bowl with the Clayton-Hamilton Jazz Orchestra on June 16, 2013, at the 35th annual Playboy Jazz Festival, with guest singer Patti Austin and flute player Hubert Laws.

The busy trumpeter took home three trophies at the October 2013 San Diego Music Awards, including Artist of the Year, Best Jazz Album (Federal Jazz Project), and Best Jazz, the latter an award he also won in October 2014. The following year, his Young Lions jazz series at Croce's moved to Panama 66 in Balboa Park.

He told the Reader “I’m really excited. This is the first time in the history of the session that it will be an all-ages event. Now the jam will actually be catered to the young musicians I’ve been mentoring. For this to happen in San Diego is sure to take things to another level — now these kids will be able to rub shoulders with seasoned veterans like Rob Thorsen and Joshua White — you know, the top players.”

In early 2016, he announced "I just got invited to perform at this year's Monterey Jazz Festival in September...it will feature an all-star band that will be conducted by Quincy Jones and John Clayton. The musical director will be Christian McBride."