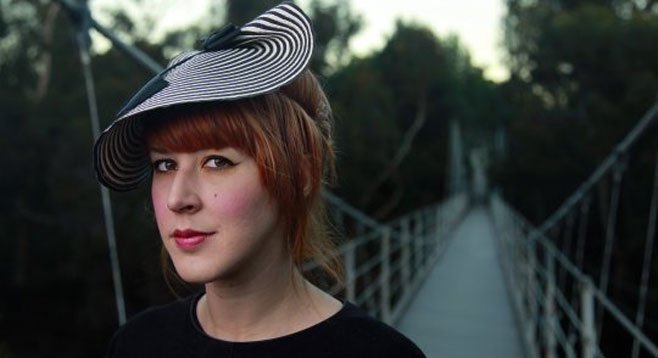 Gayle Skidmore was 11 when she confiscated her father’s 12-string guitar and taught herself to play. By the time the San Diego homegirl moved to England to study at Oxford University, she was experimenting with alternate tunings and finger styles and expanding her vocal styling to include a wider, operatic range and improvisational jazz phrasing.

While in the U.K., Skidmore performed on a local TV channel and then traveled through Germany, Italy, Austria, and Switzerland, playing on street corners and in youth hostels, busking wherever she could to earn change and the occasional free drink.

“I began playing piano in concerts around the same time,” she says, “and I even learned a bit of banjo, though I still prefer the comfort and collaboration of playing with a full band. If you fall down with people around you, someone’s there to pick you up. If you fall down alone, you pretty much stay down.”

After studying in San Diego for a master’s degree in theology with a concentration in Hebrew, Skidmore formed her own label, Raincoat Records. Her first release, the five-song EP Gayle, was issued in 2002. After her song “China” won the True American Records songwriting contest in 2003, she released a live album in 2004, followed by the 2005 EP So Deep.

Skidmore released her Paper Box EP in 2007. Produced by Skidmore, Preston Parsons, and Dave Reid, this album was created expressly for her Tour de Felícité, alongside Rheanna Downey and Amelia Emery.

Skidmore’s 2008 EP Cowley Road was co-produced by Aaron Bowen. In July 2009 she was featured in Germany’s prominent Seuddeutsche Zeitung, and has since won several song competitions in the Netherlands. She was nominated for Best Pop Album at the 2009 San Diego Music Awards and Best Americana at the 2010 SDMAs.

Her late 2010 album Make Believe on Raincoat Records came with an accompanying coloring book, and was released at the bandcamp website on a Name Your Own Price basis. She played fourteen instruments on the album, including the folk harp and the marimba, and composed all of the parts for her cellist and violinist. Make Believe was nominated Best Pop Album at the 2011 San Diego Music Awards.

Skidmore released her second full-length album and coloring book, Sleeping Bear (Raincoat Records) in Autumn 2013, following her first vinyl release, a 7″ record “Zombie Heart” via Ninkasi Brewing Co. “This is the first time I've recorded the band live together,” she says. It includes a coloring book she created. “This is my second [album jacket] coloring book...I felt incredibly inspired by this album and spent a lot more time on the artwork, most of which I worked on while we were recording.”

In 2014, her cover of “Lola” by the Kinks, a collaboration with Brandon O’Connell of Singing Serpent,
was placed on a national commercial, and she also appeared on Entertainment Tonight for a segment covering the 2014 Sunset Sessions.

She was cited Best Singer-Songwriter at the 2013 San Diego Music Awards, which named Sleeping Bear as Best Pop Album in 2014. Late the following year, she relocated to the Netherlands.

In 2015, along with drummer Bill Ray and several other locals who'd recently moved away from San Diego, Skidmore left town, in this case relocating across the ocean to the Netherlands.

Her 2017 album The Golden West was released with an accompanying coloring book. Tracked at Ninkasi Studios in Eugene, Oregon, where Skidmore stayed for two months in the summer of 2015, she was also able to record several songs at the Joshua Tree studio Rancho De La Luna, where her friend Dave Catching of Eagles of Death Metal laid down some guitar on the song "Only Ever You."

"The week before my wedding I was still finishing vocals for the album, which was pretty insane," says Skidmore of her twentieth independent release overall, her third to feature an adult coloring book with the album, each picture depicting a different song.

When asked to describe the record, Skidmore pauses for a bit and then says with a smile, "It's whimsical, melancholic music for the romantic intellectual."

Her May 2020 single “All My Life” was co-produced by Jeff Berkley (Berkley Hart) at Om Studio at Jason Mraz's Organics' Avocado Ranch and features local guest vocals from Berkley, Veronica May, Isaac Cheong, Heather Nation, and Billy Galewood. At the same time, she announced she was working on a piano album recorded in the Netherlands at Wisseloord Studios.