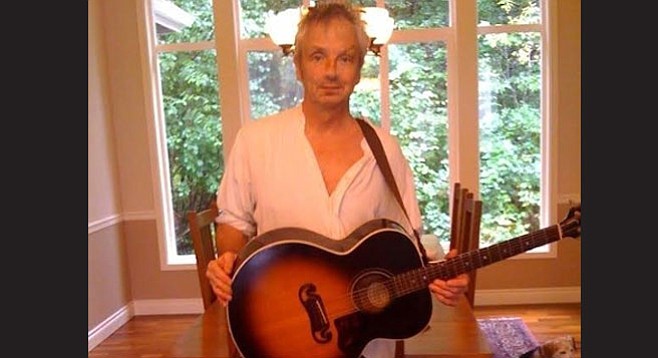 “Lyrically, I’d say my songs are half Gershwin and half gospel. Musically, call it proto-country folk punk or R&B psych. I think that covers it.”

He’s also dabbled in record production, music marketing, and journalism — having been an associate of local-bred rock-critic Lester Bangs. The list of local performers he’s worked with includes Chris Hillman (the Byrds, Flying Burrito Brothers), to whom Ra’chac presented a Lifetime Achievement award at the 2004 San Diego Music Awards.

Ràchac produces the Vince Martell Rocks America radio show from his home in Bankers Hill, though the program hosted by the Vanilla Fudge guitarist airs on WNJC in New York City. Says Ràchac, “I’m hoping the show can further the ongoing campaign to induct [Beatles promoter] Sid [Bernstein] into the Rock and Roll Hall of Fame, an effort started by Billy Joel, Roger Daltrey, Tony Bennett...”

Ràchac has been working with Bernstein, the man who brought the Beatles to America and promoted their famed 1965 Shea Stadium gig. “Believe it or not, Sid is recording his first album, at the age of 92! Plus, his autobiography, Sid Bernstein Calling, has just gone into its second edition.”

“To my delight, we hit it off, and I’m proud to say Sid has taken me under his wing. He’s not only appeared on the show three times, but he’s become my showbiz mentor. I’ve been helping in the promotion of his book and spreading the buzz of his album as a publicist, tapping into my contact list.”

Bernstein is credited as the first promoter of stadium rock concerts and for kickstarting the British Invasion by bringing the Beatles, the Rolling Stones, the Kinks, the Moody Blues, and Herman’s Hermits to America for their first stateside performances.

But, really, a record album? “On the album, Sid sings duets with his newest discovery, Dierera Brodwick, like the French standard ‘La Vie En Rose.’” The album is produced by David Spinoza.

Ràchac has accumulated a lot of celebrity tales, and one of his favorites is that of June 13, 1970, the night Who drummer Keith Moon trashed a room at the Mission Bay Hilton Hotel.

“I had hooked up with the band on their first trip through San Diego about a year prior — and especially hit it off with Keith, with whom I shared a love of early surf music — so it was no problem for me to gain access. The band had rented out the entire fifth floor of the Hilton for an after-show party. And party we did, with Keith leading the grand march through the evening festivities. Yes, I did help Keith Moon drop a sofa, albeit a small sofa, from his hotel room balcony five floors up, to land on top of one of the Who’s equipment trucks.”

And that wasn’t the night’s capper. “At about 3 a.m., me, Keith Moon, bassist John Entwistle, their road manager John Wolff, and a few girls poured into a rented station wagon and went to the all-night drive-through of the Jack in the Box on Morena Boulevard. Entwistle and his girl were in the backseat with Moonie, who was shouting out our order to the clown head at the menu stop. I’ll never forget Keith’s jabbering at the poor nighttime employee trying to take the order, who to this day probably doesn’t realize his brief brush with rock-and-roll greatness.”

Later in 2012, he announced that he’ll narrate the Raul Sandelin documentary film A Box Full of Rock: The El Cajon of Lester Bangs, profiling the writer’s 1968-1973 period spent in and around San Diego's East County. In early 2013, he began producing a NYC radio show hosted by John Lennon's “lost weekend” mistress May Pang.

“Joey Ramone’s younger Brother Mickey [Ramone] Leigh and I are collaborating on songwriting and production of a new album,” Rachac told the Reader in summer 2013, “and I’ve also been helping him promote his new bio, I Slept with Joey Ramone.”

In early 2015, Ràchac collaborated with Duncan Faure of the Bay City Rollers. "I will also be helping Duncan with the booking of his solo project and personal appearances," Ràchac told the Reader. Before joining the Rollers in 1978, Faure was a member of South African pop group Rabbitt, which evolved from a band called yhe Conglomeration consisting of members Trevor Rabin (future Yes guitarist), Faure, Ronnie Robot, and Neil Cloud. Faure's song "24 Hours" was featured in Madonna's 1987 movie Who's That Girl.

Ràchac went into 2016 with multiple projects. "I'm working directly in production, booking and musical collaboration with both Paul Cowsill [the Cowsills] and Grammy Award-winning keyboardist Augie Meyers [Sir Douglas Quintet, Texas Tornados, Bob Dylan's band], with whom I co-wrote a song, 'If You Don't Leave Me Alone),' for his new album, which he's recording in Texas with George Strait's band."

"Most currently," he said at the time, "I'm working in post-production with Brett Berns, son of the late and legendary songwriter and producer Bert Berns, on the DVD release of the award-winning documentary Bang: The Bert Berns Story.