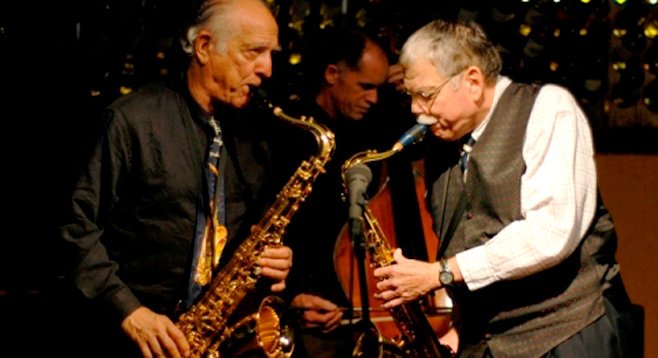 The Gary Lefebvre/Joe Marillo Quintet featured two legends of the San Diego jazz scene. Lefebvre was 13 when he moved to San Diego with his family, attending Mission Bay High School and playing in the marching band. He went on to play with many heavy cats, including Chet Baker, Shelly Manne, Leroy Vinnegar, and Shorty Rogers.

Joe Marillo helped kickstart the local jazz scene, working at the Catamaran Hotel, Chuck's Steakhouse, and other venues, with many then-young local jazz musicians, like Peter Sprague and Rob Schneiderman.

The ensemble also included Dave Kinkaid on piano, Tom Azarello on bass, and Bob Daniels on drums. However, Lefebvre passed away in August 2013, at the age of 74. A tribute show was staged September 1, at 98 Bottles in Little Italy. Marillo passed away in March 2016, at the age of 83, also sparking local tributes.