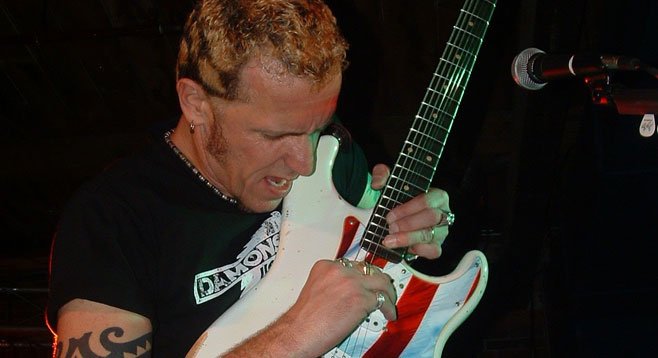 Surf rocker Gary Hoey, who spent many years living in Encinitas, was only fourteen when he was lingering outside Boston's Berklee College of Music, making friends and offering to pay for lessons. To devote his time to music, he dropped out of high school and began playing Boston's local clubs and teaching guitar to other young players. He auditioned for Ozzy Osbourne in 1988, when Osbourne was searching for a replacement for fellow former San Diegan Jake E. Lee, but the job went to Zakk Wylde.

In 1990, he teamed with singer Joel Ellis, bassist Rex Tennyson, and drummer Frankie Banali to form Heavy Bones. The band released their debut album in 1992, but broke up shortly afterwards.

In 1993, Hoey recorded the successful Animal Instinct album, including a cover of the Focus hit "Hocus Pocus," which hit the Billboard Top 5. The successful Endless Summer II soundtrack soon followed. He went on to record around several instrumental albums, all electric guitar oriented. His 1996 release Bug Alley included his vocals as well, as have subsequent albums.

His Deja Blues album was released in 2013. The surf rocker spent summer 2014 with Yngwie Malmsteen on the Guitar Gods 2014 tour of North America, along with Guns N' Roses' Ron "Bumblefoot" Thal and Uli Jon Roth of Scorpions fame, kicking off June 13 in Huntington, NY at the Paramount Theatre.

2019 saw the release of Neon Highway Blues, self-produced at his New Hampshire based home studio. Guests on the album include Eric Gales, Lance Lopez, Josh Smith, and his 17-year-old son Ian.