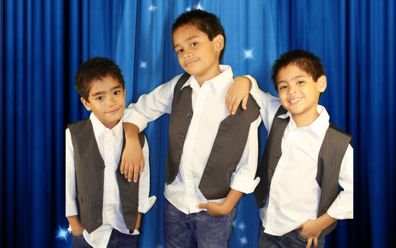 RIYL: The Jackson 5, Hanson, the Osmonds

With a name inspired by their role models the Jackson 5, the brothers of the Garcia 3 were age 7 (Angel), 9 (Hector), and 11 (Juan) when they founded a band in 2010. They made their debut in the entertainment industry in 2004 at the Hawaiian Tropics and California State Pageants in San Diego.

The boys were subsequently featured in the film Little Fockers, as well as appearing in several Nickelodeon shows, and doing commercials for Toys “R” Us, Kraft Singles, and print ads for Ross stores.

Their first music gig was a school talent show, where they sang an a cappella version of “Lost in Love” by New Edition.

“We were very nervous,” says Juan, “especially just being in school for two months. We were still considered the new kids. Standing in front of the entire school, we were worried at first. What if we messed up? As soon as we got to the second verse, the other kids started clapping, even before the song was over.”

Their debut single “All Around the World,” released in May 2011, earned spins on Disney Radio, and their debut album includes a cover of the Jackson 5’s “I’ll Be There.” When not in school, taking music lessons, filming, or recording, the brothers play video games, cook with their mom, and visit Southern California amusement parks.

“And we all have chores to do,” says Juan. “We help out by washing our own dishes, vacuuming and picking up our room, and doing our own laundry.” The boys say they remain grounded by attending church on Sundays and doing community charity work.