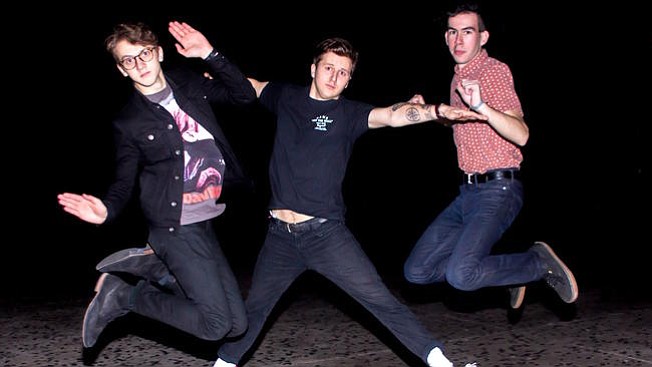 They're playing the 2020 BottleRock Napa Valley festival, running May 22 through 24, headlined by Chili Peppers, Stevie Nicks, and the Dave Matthews Band.

Surf-punkers the Frights were still teens when founded by Richard Dotson (the Cricks), Mikey Carnevale, and Adam Lomnitzer (both from Monomood and Black Hootie).

“We did go to the same high school as blink-182,” says Rancho Bernardo High alum Carnevale about himself and Lomnitze (bassist Richard Dotson went to Westview in Rancho Peñasquitos). “And every band who came out of our school wanted to sound like blink. But it wasn’t my style.”

The Frights recording career was made possible by Soma manager Joe Nammo, who released their debut on his Postmark label. “We had just played this really good Soma show opening for Voodoo Glow Skulls. Joe came backstage and told us he really liked us and he wanted us to be on this new label he was starting. We had literally just played our first show and we had, like, five, maybe six songs. We weren’t even planning on taking this seriously then. We asked ourselves, do we sign with this stranger we just met at Soma?”

They changed their name to the Frights and released their Dead Beach EP. They released a split 7-inch single in November 2011 with Mrs. Magician, "Prescription Vision" b/w "I Know What Girls Like", with 500 copies on the Grizzly Records label, followed in May 2013 by their Fur Sure EP and then a self-titled full-length album.

Dotson and Carnevale formed the Otters, and were later joined by Lomnitzer to play as Black Hootie at Soma in December 2012.

In 2015, the Frights signed with Dangerbird Records, which released their album You Are Going to Hate This early the following year. They played Berkeley, CA's Uncool Fest in February 2016. December 2016 saw the release of a new single and video for “Christmas Everyday.”

In 2018, the lineup included Mikey Carnevale and Richard Dotson now accompanied by guitarist Jordan Clark (Feelings Mutual, Hot Like a Robot) and drummer Marc Finn. Early that year, they signed with Epitaph Records, and released a Valentine's Day song and video for “Valentine’s Sux.” Another single debuted in May, "Crutch," said to be from a full-length due later in the year and promoted with a short U.K. tour.

Their third full-length Hypochondriac was produced by FIDLAR frontman Zac Carper (SWMRS, Dune Rats), mixed by Rob Kinelski (Ed Sheeran, Billie Eilish, 30 Seconds To Mars) and mastered by multiple Grammy Winner Greg Calbi (Arcade Fire, Tame Impala, the War on Drugs). Their major label debut, it dropped in August 2018, with videos released for "Crutch" and "Me and We and I" and a lyric video for “No Place Like (Not Being) Home.” A support tour ran through October 2018, after which another video debuted, "Over It," filmed at the Dorie Theatre in Hollywood.

The Frights Live At The Observatory, released in April 2019, is a document of their sold-out kick off show of their Hypochondriac headline tour at the Observatory in Santa Ana on September 8, 2018. The album, featuring 14 songs spanning the band's complete catalog, was supported with a tour that included their debut appearance at the Coachella Festival. A single for "Over It (Live)" quickly earned around 1.5 million Spotify streams and was released as a video as well. It was followed by a single for "Whatever (Live)."

They played the 2019 Coachella music festival, as well as the 2020 BottleRock Napa Valley festival, headlined by Chili Peppers, Stevie Nicks, and the Dave Matthews Band. Their fourth studio album Everything Seems Like Yesterday was announced in early 2020.