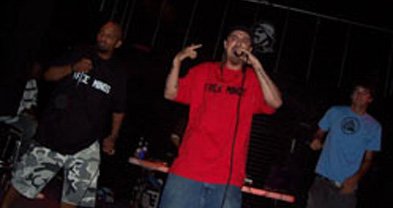 "There aren't really any gangs out there," says 19-year-old Free Mind, who graduated from Poway High last year. "There are barely any Asians where I'm from. I kicked it with black people, so I was considered one of the black folks. That's why I'm based in hip-hop."

Free Mind, of Asian descent, raps in Young N' Dangerous, a hip-hop collective that includes Kid Deception, 25, who is from Rancho Peñasquitos. I note that the Poway/Peñasquitos areas (the provenance of blink-182 and Unwritten Law) aren't exactly hip-hop hotbeds.

"They have this battle of the bands every year [at Poway High]," says Free Mind. "They had all these rock bands because the area is based on rock music. We were the only rap group. Everyone thought we were a joke."

"It's hard for us in [area code] 858. Some people won't take you seriously. I know a lot of guys who won't claim 858. They say they are from 619, but they are completely bluffing. They talk about pulling pistols and drugs and all that stuff, and they are lying; they never lived a gangster day in their life."

Free Mind says, "Just 'cause I live in Poway doesn't mean we're rich folks. We live in an apartment. Poway is either rich mansions or dirt trailer parks. My whole family is from El Cajon. My mom didn't want us to live the gang life."

Free Mind, half Thai, half Laotian, says he has no desire to become a trailb-lazing Asian rapper. "There is this guy named Jin who says he was the first Asian rapper. Wyclef Jean [of the Fugees] got ahold of him and made him do a song called 'Learn Chinese.' He actually raps in Chinese. Everyone just laughed at him."