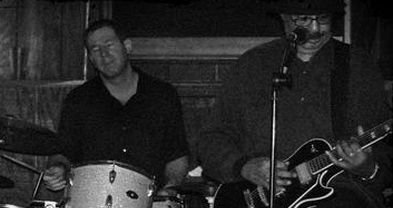 Sound description: The band describes its sound as hard driving and slide-winding blues.

Judging by the size and tumult of any Saturday night Dolphin Inn crowd, bluesman Fred Heath is finally in full stride. The leader and driving wheel behind the Slidewinders can look back at his trail with the satisfaction that it was all probably worth it. It certainly wasn't a vertical ascent.

Heath, a local San Diego product, began "messin'" with the acoustic guitar at sixteen, during the early '60s when rhythm and blues proliferated with many great songs and artists. Heath also became infatuated with the sounds of Bo Diddley and Elmore James. They were played less seldom than most but his ear retained a liking for blues and its rhythm patterns.

A year later, his father in Chicago carded a low score in a golf tournament that produced a cash trophy. Knowing his son loved the guitar, Mr. Heath purchased and mailed off to his son, Fred, a Gretsch electric guitar and amp.

So, Heath's musical direction was laid out before him with the help of several "nice-outs" and a steady putting stroke. Not really the stuff that blues fans expect to hear but, none the less, true.

The non-infamous Morticians was the first band Heath put together and did remarkably well with steady gigs at private parties and school dances. Its music favored Motown and Atlantic stuff, but was forced to disband in 1969. Family, marriage and job commitments were the downfall.

A full ten-year public playing hiatus followed but in his private life, Heath continued jamming with friends and relatives. He also rekindled his interest in the blues and added slide technique to his guitar playing.

During 1978 and 1979, he was to team up with Tom "Cat" Courtney at the Texas Tea House in Ocean Beach. Simultaneously, Chris James would enter the picture and, off and on, back up on harp as Courtney and Heath handled the guitar and bass. That musical kinship remains to this day.

Nine years later and pumping strong, the Slidewinders continue rocking the house. Heath believes he's finally found the sound and himself with the group, "I feel like I can really flex. Our band has this something special, this magic going every time we play. It's so strong and contagious, it's almost non-abstract."

In person, expect to hear Chicago blues of the 50's, Freddie King, B.B. King, Slim Harpo, and even a Jimi Hendrix tune. Their version of "Red House" is a classic. And do not fail to catch Heath's theme song, "Fred's Blues". He can drive a spike right into the blues of Elmore James and flex. Yes, he does.