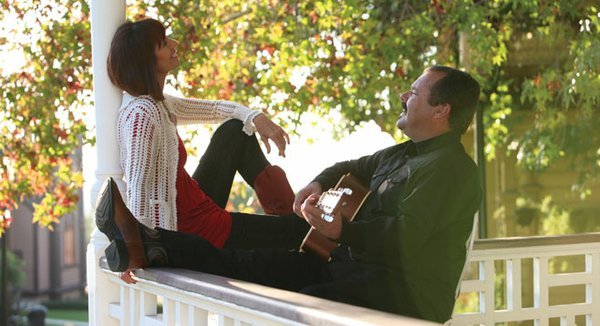 When married-duo Harry and Nancy Mestyanek launched Folding Mr. Lincoln in 2006, the plan was a gentle country-roots ensemble.

“Though we continue to evolve as a band and to develop musically,” says Harry, “I feel that our music is based in the folk genre. Not traditional folk but contemporary folk, played in true ensemble fashion.”

With Harry on vocals, guitar, mandolin, and bouzouki and Nancy on vocals, drums, and percussion, the two play mostly originals, though Nancy notes, “We do throw in some special covers. Special to us, anyway. We choose them because they evoke a feeling, express a certain tone, or contain a message.”

Both say they’re fortunate to have survived long enough to bring their music to local stages such as Rebecca’s in South Park, where they have a monthly residency. Nancy was diagnosed with breast cancer the day before Thanksgiving, 1998, while Harry (who doubles in the daytime as ceramic artist Harry the Potter) was diagnosed with an acoustic neuroma in December, 1993. Both fully recovered.

“I was lucky, as my tumor was on the small side, as these tumors go,” says Harry, who underwent radiostatic neurosurgery in June 1994. “I lost the ability to hear in my right ear and suffer from a bit of balance damage as a result of that surgery.”

Folding Mr. Lincoln’s debut record Within My Reach was released in early 2009. The CD was produced, recorded and mixed by Jeff Berkley (of Berkely Hart) at Berkley Sound, and mastered by Gavin Lurssen at Lurssen Mastering, in Hollywood.

In 2010, the band released Folding Mr. Lincoln Live, recorded May 22, 2010, at Old Time Music in San Diego. Bassist David Ybarra left the group in early 2011, to be replaced Greg Gohde, of Bass Clef Experiment and owner of the Classics Bows and Violins shop on Adams Avenue.

Nancy McCartney Mestyanek passed away in 2014, after a long and courageous fight with brain cancer.