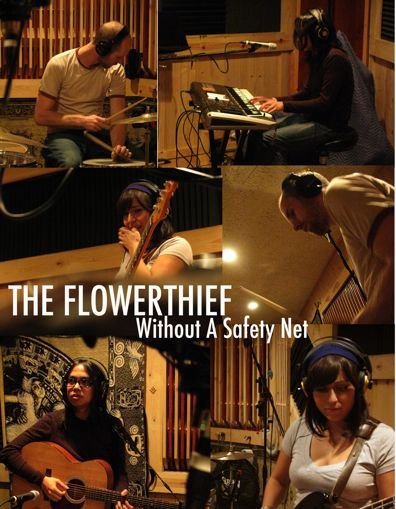 Sound description: Boasting musical eclecticism, many of the songs make use of Beatles influenced melodies and whispered Cagean soundscapes.

The Flowerthief is a three-piece rock band formed in 2008 by multi-instrumentalist Christian Motos, a native San Diegan who specializes in chamber-leaning pop-rock that expands on Motos’s Rubber Soul–era Beatles and McCartney and Dylan influences

In 2007, to promote the release of his debut album Half, Motos enlisted the help of drummer Ben Kent, and bassist Ashley Nikolin (later replaced by Carissa Aguayo). Their 4am EP was released in 2009.

A full length Flowerthief album was released in May 2010, Without a Safety Net, produced by Michael Kiner. The record found the group combining their folky skiffle sound with straight ahead rock, even as Motos mastered the art of being as enthused about stomping his pointy-toed boots on the stages of near-empty bars as he is in houses jammed with supporters.

Following in the boot prints of his hero, Paul McCartney, the ambitious CSU San Marcos alum composed a song for the new James Bond film Skyfall. (The song wasn’t used in the film, but it closes Flowerthief’s self-released 2013 album Natural Selection). According to Motos, “It harks back to the ’60s Bond, where John Barry and Monty Norman meet Ennio Morricone.”

Their Sleight Detour EP was released August 19, 2014. "it was the first EP to be co-produced with a Grammy Award-winning recording engineer Alan Sanderson at Pacific Beat Studios," Motos tells the Reader.

The lineup for the EP features Motos, Greg Smith, Sean Cox, Greg Irwin, and Austin Reitz. "It's our first EP to be recorded by the group [known for frequent personnel changes] as a quintet, at the top of our game, musically. It's got all the strengths the Flowerthief has been known for: infectious melodies, rich harmonies, and well crafted songwriting."

"The EP title Sleight Detour is about the band in its current state. Different musicians bring different dynamics, and this lineup brought out the band's late '60s rock sensibilities and stirred it further, in a very explicit way, towards a strange yet familiar territory. The word 'Sleight' was used in place of 'Slight' as an obvious pun, but it also describes the way we've done things this time around, pulling our strengths together to make one cohesive work with a deceptive and cunning musicality."