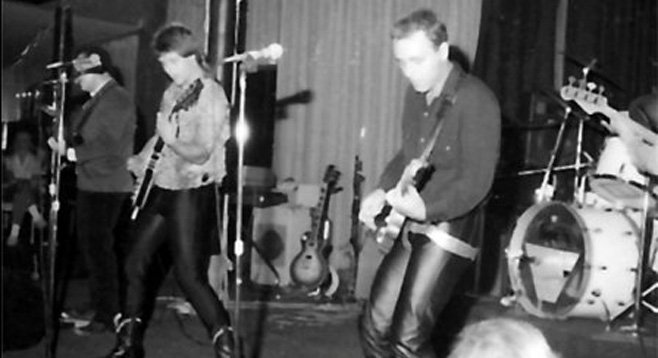 RIYL: Joey Harris and the Mentals, the Beat Farmers

“When I was young, I always thought that if I could just write a song that would get on the radio, all the good stuff would just happen,” says founding Fingers guitarist Paul Kamanski, probably best known perhaps for writing hits for the Beat Farmers, a San Diego cow-punk band of national stature. Fingers also included Billy Thompson and future Beat Farmer Joey Harris (with whom Kamanski also played in the Electric Sons).

“A lot of good stuff happened, and a lot of bad stuff, too, which is really interesting about the whole trip. But it really started out with the dream of if I could write some lyrics, and if I pay attention to detail and I’m not afraid, if I write and I get over the fear of saying exactly what I feel and take the criticism. I started writing songs, and the next thing I knew I had one called ‘Bigger Stones’ that the Beat Farmers picked up.”

Not that the music biz has always been a goldmine. Says Kamanski, “I made a little bit. There were royalties for a while. When you get your first check for 700 dollars you go, ‘What? For writing music? Are you serious?’ Then one day you get a bigger check and you go, ‘Oh, my, I could actually make some money.’ But you watch it go up and down. The weirdest thing about the business is that when you go into it, you’re hyper and scared to death and excited about getting signed but what you don’t know is how you’re gonna get screwed. You know you’re gonna get screwed, you just don’t know how.”

The Fingers played L.A. and San Diego from 1979 through 1981, during southern California's punk rock years. According to Joey Harris, “The Fingers stood out from other bands of the time, with three lead singer/songwriter/guitarists. More pop than punk, the Fingers tunes showcased melodic songwriting and three part harmony, but the band’s secret weapon was now legendary guitar master, Billy Thompson, spraying the stages of socal with a barrage of fully automatic guitar blasts.”

As of 2012, Kamanski was still making music, most notably with ongoing side project Comanche Moon and with the Rock Trio, alongside Joey Harris and Caren Campbell. The Fingers reunited July 3, 2012, to play the Coronado High School All-Class reunion party, with a lineup that included Billy Thompson, Paul Kamanski, Vic Vecina, Joey Harris, and Danny Campbell on drums.