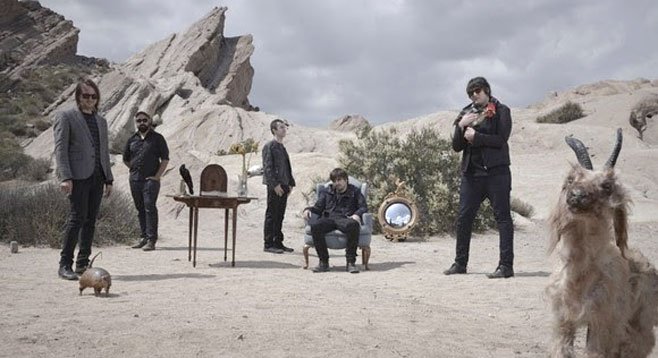 Sound description: The band describes its music as the sound of "a dump truck falling off of the Empire State Building."

The definitive lineup for emo/punk quintet Finch consisted of core members Nate Barcalow (vocals), Alex Linares (guitar), and Randy Strohmeyer (guitar/vocals). Their 2002 release What It Is To Burn was followed by 2005’s Say Hello to Sunshine, though Nate Barcalow quit the band.

Say Hello to Sunshine was so poorly received that the band split in February 2006, with an announcement that their “individual priorities lie in different places.”

The band reunited in October 2007 with Barcalow, Linares, and Strohmeyer accompanied by Drew Marcogliese on drums and Daniel Wonacott on bass, both of them members of Cosmonaut, Barcalow’s post-Finch band. New recordings were planned for 2009, until Barcalow quit the band for the second time.

They reunited again for a series of 2013 shows.

September 2014 saw their first release in nearly ten years, Back to Oblivion (Razor & Tie Records), preceded by the single “Two Guns to the Temple” and followed by a U.S. tour running through November 8. It was produced by Brian Virtue (Deftones, 30 Seconds to Mars, Janes Addiction, AudioSlave). A video for “Anywhere But Here,” directed by Dylan Bell, appeared online in October 2014.

"We all knew it was coming, it was not a shock," said the band in an online statement. "In 2015, we wrote a batch of songs, but did not have a completed album. We entered the studio with a producer friend of ours to work on some material that would complete the album and begin pre-production on the songs we already had. Nate was a no show for the majority of these sessions and chose to stop communicating with the band in January 2016."

"Throughout 2016, there have been tour offers we've had to pass on, festival appearances we've passed on, because we were unable to reach Nate. I think it is important for Finch fans to know that we've always had the best intentions, we always strove to create the best songs we could, but you cannot control other peoples' behavior. Nate's choice to quit again is disappointing, but not unexpected."

I now know why these "Band Synopsis" pages in the SD Reader are not credited to an author. And it only took a very brief Google search - one that lasted well under a minute, to notice the glaring mistakes all throughout this short piece. From consistently misspelling the last name of Finch's frontman Nate Barcalow, to incorrectly naming Conan Moses and his band (Wounds), as the supporting band for Finch on their latest tour. Check out the record, it"s worth it. :-(