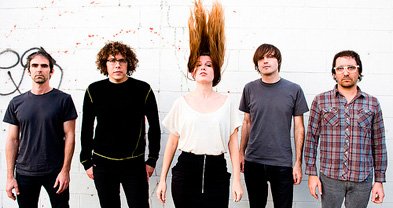 Film School is a five-piece indie rock band from San Francisco. Bassist/singer Lorelei Plotczyk moved to San Diego in summer 2010, around the same time their album Fission was released on the local Hi Speed Soul label. The rest of the band lives in SF and LA.

Compared to her cramped apartment in L.A.’s trendy Silver Lake neighborhood, the Mission Valley condo that Plotczyk moved into was a welcome change. “It’s in Mission Valley — not hip,” she said shortly after arriving in San Diego. “I can’t tell you how refreshing that is. There is so much space and fresh air compared to what I’m used to...our backyard is like a nature preserve.”

Plotczyk shares the condo with her husband, San Diego writer-musician James Meetze, and his son. Plotczyk relocated just a week before she got married to Meetze, singer-guitarist for pop band Dreamtiger, on August 14, 2010.

“Initially we thought that [James and his son] would move to L.A. because, well, it’s L.A., and we are musicians. I work in television and James is a writer. But the more we thought about it, the more it made sense for us to be here.”

Transitioning to her new digs in San Diego wasn’t easy, especially when it came to her role in Film School. “It’s a pain in the ass. I won’t lie. I’m a frequent traveler on the Pacific Surfliner train,” adds Plotczyk.

One bonus of living in San Diego is she won’t have to travel far to meet at the band’s new label, Hi-Speed Soul. The record label is located in San Diego and run by Eric Howarth, owner of M-Theory Music. On August 31, 2010, Hi-Speed Soul released Film School’s Fission album.

Film School kicked off a monthlong tour at the Casbah on September 19, 2010. She and Meetze also record under the moniker Weekend Wives. The side project, says Plotczyk, borrows inspiration from the Beach Boys and shoegaze indie rockers School of Seven Bells. “The vibe is retro harmonies but with modern beats and catchy guitar and vocal hooks...and lots of fun to play.”