Fifty on Their Heels 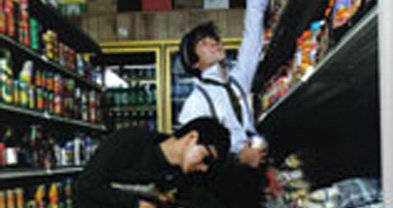 Sound description: Punky punk for punks to get punked by.

Fifty on Their Heels (named after a Max Brand pulp western) plays standard punk -- quick, stripped of effects, and with high-pitched vocals. The singing isn't the screeching of X-Ray Specs, but more warbling and melodic, similar to the Sex Pistols and Buzzcocks. In fact, lead singer Junior Metro seems to pick up right where Johnny Rotten left off.

With only one small-press CD under their belt, the band landed two songs on the soundtrack to Sony's Playstation 3 game "Cash Guns Chaos." How did it happen?

According to Cat Dirt Records head Scott Pactor, "Sony's PR person Katie Uhlman called Tim Pyles at 94/9 and asked him to list 50 bands from his iPod that fit with a '70s punk theme, and they picked us from his list.... The deal is that we give them a nonexclusive license to use [each] song, i.e., we still own it, in exchange for a one-time fee." Sony paid "low three figures for each song."

Fifty on Their Heels won a San Diego Music Award for "Best Punk Album" in 2006, and they were nominated for "Best Alternative" at the 2007 awards.