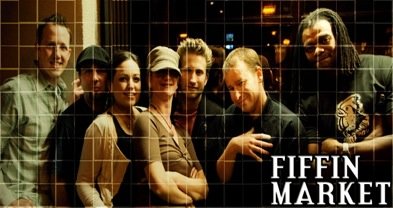 Fiffin Market is fronted by Kimberly Gray (vocals) and her husband Beau (vocals, guitar), who previously played with Troy’s Bucket and the Glorified. “Armed with Beau’s acoustic guitar and their voices,” according to their MySpace page, “they began playing the local coffeehouse circuit. With a passion for acoustic music and traditional songs inspired by the music of Great Big Sea, Fiffin Market made strides to make their mark as one of the top Irish bands in the region.”

Singer/bassist Marcel joined in spring 2006, turning the duo into a trio. Later that year, Fiffin Market needed a drummer for their annual “Autumn Forever Tour,” which included a slot on the main stage House of Blues in Las Vegas. Brinton Ward joined on skins, and in December 2006 the band added Odell on viola and violin.

Fiffin Market’s album Lost at Sea was released in October 2007, featuring covers of traditional Irish tunes like “The Wild Rover” and “Molly Malone,” as well as original songs like “My Dream” and “City That We Love.” Their second album is called The Monterey. In February 2009, the band released The Lighthouse.

In summer 2009, the band changed its name to Lexington Field.