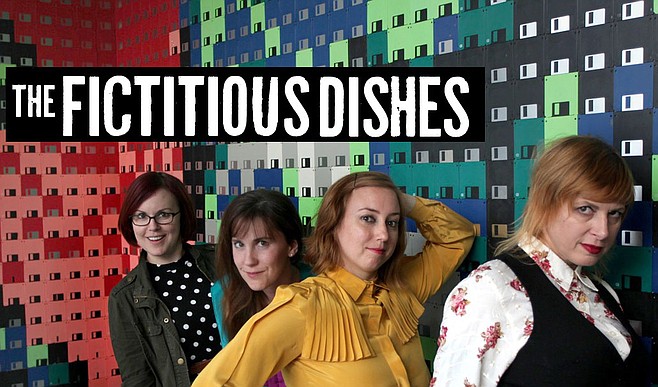 Based in North Park, Fictitious Dishes is a non-fictitious indie pop/indie rock band. Members have played in local bands like the Dirty Legs, Revenge Club, and the Unruly Bangs, as well as Mandarin Dynasty (now in Portland, OR) and Love Lashes.

"As far as musical stylings go," says the band, "the general 'indie pop/rock' descriptor is probably the easiest to apply, though we have been described as 'femmepunk.'" An album called You Could Never Be Enough was released in 2015.

Their Frontier Literature EP was released in March 2018. Only 50 physical CDs were made, each with a unique design hand-created by the band members. "The collage-style artwork features a lot of cats, because Taryn [Popplewell, vocals and guitar] likes them," says Liz Malloy. "Jacquie [Bazinet, bass and vocals] is more of a dog person. I'm allergic to both. Maggie [Sleeper] plays drums. The art also includes imagery relating to the record content."