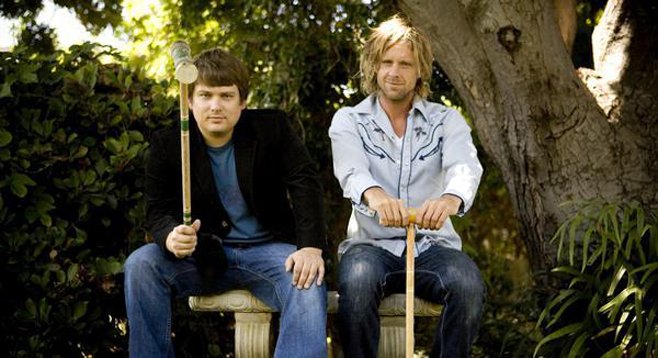 Watkins has kept busy since the hiatus of the Grammy award-winning trio Nickel Creek. Besides his solo recordings, he’s been hosting a weekly residency at the Largo in Los Angeles known as "The Watkins Family Hour," which regularly features guests such as his sister and fellow Nickel Creek bandmate Sara Watkins, as well as Fiona Apple, John C. Reilly, Greg Leisz and Benmont Tench of Tom Petty and the Heartbreakers. Jackson Browne has also been known to join the Watkins duo and their friends for a few songs.

Switchfoot singer/guitarist Jon Foreman hasn’t left that band, but he has been flexing his solo muscles, releasing two double-EPs in 2007.

The seemingly unlikely duo met a few years ago at the 2003 Street Scene featuring Wilco, R.E.M., Nickel Creek and Switchfoot. Over time, they began writing songs together, which quickly turned into a full-length album consisting of 12 original tracks written, arranged and recorded by Watkins and Foreman at their homes in San Diego.

Since both are vocalists and multi-instrumentalists, they often take turns singing lead vocals, and they both play several instruments on each song including guitar, bass, keyboards, percussion, baritone ukulele, piano, organ, mandolin, steel guitar, 12-string guitar and more. Nickel Creek fiddle player Sara Watkins is featured on a few songs as well, as is drummer Aaron Redfield, but all the remaining music was made by the Foreman/Watkins duo.

"It's almost the ideal artistic setup," Foreman explains, "because you don't really care about timing or any commercial aspect. We figured it'd probably never come out and we'd probably never finish it. But, hey, we've got these songs, so we're just gonna work on them when we feel like it."

Their self-titled debut album, released January 20, 2008 via ATO Records. The deluxe CD edition features a cover of "Friday I'm In Love" by the Cure. Fiction Family toured in early 2009.