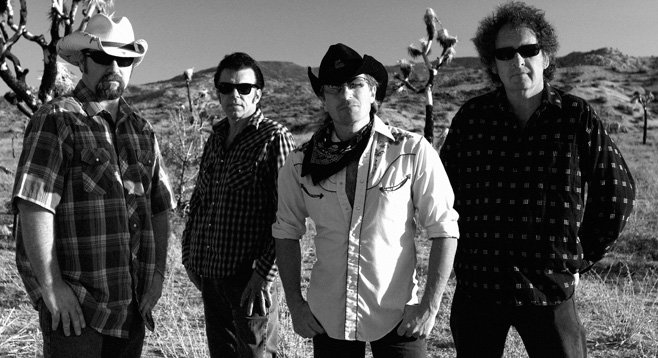 The Beat Farmers were an alternative rock and country music band formed in August 1983 that enjoyed a cult following throughout the 1980s and early 1990s before the premature death of lead singer and drummer Country Dick Montana.

Montana was known for lying on his back and drinking his beer using only his feet, like a grizzly bear, and for bantering with his audiences, whom he often sprayed with beer. After performing a show, he would often walk around the club, shake hands, sign autographs, and chat with fans. Despite being treated for throat cancer twice, he was always ready for a beer run.

1984 -- By March they were signed to a one-off record deal with Rhino Records with a $4000 budget. Their first album, Tales of the New West, was produced by Blasters/Los Lobos saxophonist Steve Berlin and released in January 1985. It included "Happy Boy," frequently played on The Doctor Demento Show; the song became a favorite of the group's live shows and was perhaps the only song of the 1980s to contain the chorus "Hubba-hubba-hubba-hubba-hubba." The album also included the songs "Reason to Believe" by Bruce Springsteen and "There She Goes Again" by the Velvet Underground, along with nine other original songs.

The first studio experience, according to guitarist Buddy Blue, “was pretty intimidating, I remember at the studio Barbra Streisand was in one room and Jermaine Jackson was in another. Later we did overdubs in a smaller studio and there was this big tank of nitrous oxide. That album was kind of cut in between everybody taking trips over to the tank and huffing nitrous!”

1986 -- After England came a grueling American tour and a seven-record deal with Curb Records followed by a souring experience making the next record, Van Go. According to Blue, “Curb Records wanted the next Dire Straits.” Blue gave his notice and went solo. Montana wanted to replace him with Joey Harris and Paul Kamanski, both formerly of top local rock band the Fingers. Raney objected that the band did not need three singer-guitarists, so only Harris was added to the lineup. Harris, a guitarist and mandolinist, had worked earlier with Montana in a precursor to the Beat Farmers called Country Dick and the Snuggle Bunnies.

1987 -- Curb Records/MCA released The Pursuit of Happiness, featuring Kamanski's "Hollywood Hills" and a memorable cover of the Johnny Cash chestnut "Big River." "Hideaway," written by Joey Harris, was featured in the soundtrack to the film Major League.

1989 -- Poor and Famous was released and included "King of Sleaze," a notable collaboration by Montana and Mojo Nixon. Later in the year, Montana and Harris formed a side project with Nixon and Alvin called the Pleasure Barons, a group that specialized in lounge music.

1990 -- Live, Loud, and Plowed, a live album, was released by Curb Records. Recorded in San Diego at the Bacchanal, it featured cameos by Nixon and Iron Butterfly alum Jack Pinney. Guitarist Joey Harris refutes rumors (on Wikipedia and elsewhere) claiming the band didn't give permission for the release. "It was definitely released with the band's participation. We were hoping the double record packaging would count as two records, therefore getting us closer to ending our deal with Curb. They didn't buy it, but we released the live record as a love letter to our fans."

1991 -- Montana was treated for a thyroid condition and continued to visit the doctor's office for cancer treatments. The band grew dissatisfied with its relationship with Curb Records and attempted to get out of their seven-album contract. Montana continued side projects in the Los Angeles area, including work with the Incredible Hayseeds, Country Dick's Petting Zoo, Country Dick's Garage, and the Pleasure Barons.

1993 -- Finally free from its contractual obligations with Curb/MCA, which reportedly hoped to oust Montana from the band, the group recorded Viking Lullabys in Vancouver, British Columbia.

1994 -- Viking Lullabys was released in August by Sector 2, an Austin, Texas record label. The band toured heavily to support the release while working on a second album for Sector 2.

1995 -- Curb/MCA put out The Best of the Beat Farmers without the band's consent. Sector 2 released Manifold in September; however, it was released two weeks earlier in San Diego to coincide with that year's Street Scene.

Montana died during a Beat Farmers gig in Whistler, British Columbia, on November 8, 1995. At the end of the set's third song (his second behind the drum kit), "The Girl I Almost Married," Montana slumped over. Guitarist Jerry Raney began to play Hank Williams's "Setting the Woods on Fire," but all Montana managed to do was hit a cymbal, look at bassist Rolle Love, and then lie slowly across his kit.

Road manager Tom Ames rushed out from the wings and lowered Montana to the stage as band members kicked the drums out of the way. He was breathing but unable to move or speak. When paramedics arrived ten minutes later, the 40-year-old was dead.

Montana's cause of death was ruled an acute aneurysm. He had cysts on his kidneys, and it has since been revealed by road manager Ames that Montana knew he had a blood clot in his leg but hadn't gone to a doctor for treatment. On the day of the gig, a Whistler, B.C., paper described Montana as "a man who already has one foot in the grave."

The remaining Beat Farmers decided to dissolve the band three days later; however, the remaining members formed several new bands including Raney-Blue, Powerthud, the Mentals, and the Flying Putos.

1996 -- Bar/None Records of Hoboken, N.J., posthumously released The Devil Lied to Me, a Country Dick Montana solo album. The performers included Katy Moffatt, Rosie Flores, Nixon, and Alvin. The selections include Dave Alvin's "Rich Man's Town," Paul Kamanski's "Indigo Rider," a cover of Tom Petty's "Listen to Her Heart," and the original "King of the Hobos," as well as a tribute to amateur rappers, "Bum Rap."

2003 -- Buddy Blue released The Beat Farmers Live at the Spring Valley Inn, 1983 on his own label, Clarence Records. The song "Happy Boy" was featured in the movie Dumb and Dumberer.

A partial Beat Farmers reunion concert took place in September 2005 at the San Diego Music Awards.
"I knew something was rotten in Denmark when I didn't see Joey [Harris]," said Candye Kane.

A version of the Beat Farmers -- without Dick, now "the Farmers" -- released a new album, Loaded, on September 2, 2005. The band used half of the old Beat Farmers logo designed by Montana. On November 11, 2005, a "10 Years without Dick" concert was held at the Casbah, paying tribute to the late Dan McLain (aka Country Dick Montana). The show featured a reunion of Montana's pioneering punk band, the Penetrators.

Rosie Flores, Mojo Nixon, Steve Poltz, Jose Sinatra, and other Country Dick friends got together for the tribute. Jerry Raney, who played guitar with the Beat Farmers for their 12 years together, wasn't there. Neither was the first Beat Farmers guitarist, Buddy Blue, who stuck with the band for 2 years (Harris, who replaced him, played until Dick's death).

"Buddy and I don't plan on being there," Raney said by phone before the show. "There are certain people involved we don't want to be around."

Insiders say there was a rift between a reunited band called the Farmers (Blue, Raney, original bassist Rolle Love, and drummer Joel Kmak) and others who felt that Harris should not be excluded from any Beat Farmers tribute. Harris, the "band leader" for the event, said he didn't want to contribute to any bad vibes. "I'm sure Dick would be bummed," said Candye Kane.

The newly named Farmers (Blue, Raney, Love, and drummer Joel Kmak) recorded on the Clarence label. One Beat Farmer fave, "Watching the River," closes out the rereleased and expanded edition of Tales of the New West; its inclusion makes a nice coda to the story of the Beat Farmers’ early and best years.

On June 6, 2008, bassist Rolle Love left the (Beat) Farmers after 25 years. Love helped found the band in 1983. Love’s departure leaves Jerry Raney as the sole original member in the group. Raney, who has been a mainstay of San Diego’s music scene since the early 1960s, never considered splitting the group.

“Rolle just didn’t want to do it anymore," Raney told the Reader, "but we had a bunch of gigs lined up that I didn’t want to cancel. There was no doubt we would keep going.”

Another ex-Penetrator, Chris Sullivan, replaced him on bass. Says Raney, “We’ll definitely be adding some Penetrators songs into the mix. After all, there are now more original Penetrators in the band than Farmers.”

Drummer Kmak recalls the annual Country Dick/Buddy Blue fest at the Belly Up in 2011. “During sound check Mojo Nixon says to me 'We gotta practice the Helicopter.' I say, 'Whats that?' He says 'It's where I pick you up and spin you around as I hold you over my head. Country Dick and I used to do it and, even though I'm older, you’re smaller and weigh less than he did, so we should be fine.' I say no way! But onstage, in the middle of a song, he calls me out, so what else could I do? I lived to tell the tale. It's even on YouTube somewhere.”