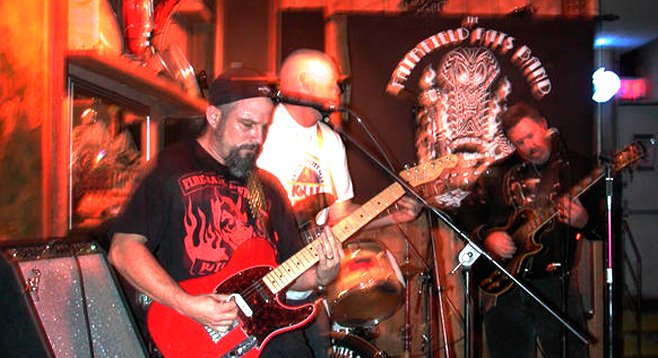 The Fairfield Fats Band was founded in 1977 by George Davis and Andy Norton, the two-guitar nucleus of the band who began playing at the raucous keg parties of Clairemont. Filling out the group are bassist and singer Stephen Hoshko and drummer Tom “T.C.” Curtis.

Davis is probably best known by his artistic aka, Geo, longtime local concert poster artist whose style has become synonymous with hard rock shows. He says, “I began by doing a banner many years ago for a high school friend, Stephen Pearcy, for his band Mickey Ratt, which later became Ratt. I dabbled a bit with art, but didn’t get real serious until the Fairfield Fats Band…that’s where I first started doing flyers for parties and shows, and then friends started asking me to design logos and posters for their bands too.”

Davis is also known for Fox’s TV cartoon Attack of the Killer Tomatoes (1990 – 1992), for which he produced animation at Sorrento Valley-based American Film Technologies alongside Earthworm Jim creator Doug Tennapel, Image cartoonist Jeromy Cox (whose Vampyrates comic features Shambles guitarist Kevin Donaker Ring), and others. “It was the first ‘paperless’ animation studio,” says Davis. “All the storyboards, music, and sound stuff was done in L.A., but the animation was done down here.” The original Tomato movies were filmed locally and featured early film appearances by George Clooney and TV “millionaire” Rick Rockwell.

Davis cites Fillmore concert posters and the underground comics of Rick Griffin as early inspirations. “Okay, and maybe my first Playboy magazine,” he says. “When I started doing posters and flyers, it was mostly metal shows, which is stuff that I totally get. Drawing hot chicks, demons, skulls, barbarians, wizards, and dragons? It doesn’t get any better than that!

“When a show is coming up,” he says, “I think about the theme, style, or vibe of the band I’m doing. I want to create something that kind of tells a story, or leaves an impression of what kind of show you can expect.” A gallery of Geo’s poster art can be seen at myspace.com/tikigeo.