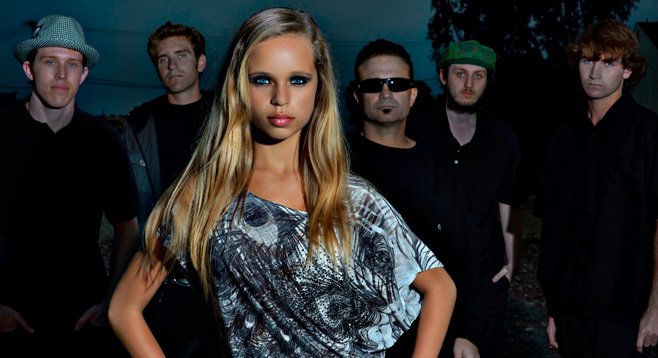 The Fabulous Rudies are North County ska band founded in 1997 by singer Tom Voris, who taught history at San Marcos High School at the time and would later teach economics and history full-time at El Camino High School in Oceanside.

“They were having a music festival in the gym, so I put together a group with some teenage students,” he says. Three of the average eight members remained from that original student lineup for years, well into their 20s. Rolling Stone’s April 7, 2005, “Children of Rock” cover story mentioned the band.

They have played five different Warped Tours, a local band record matched only by New Found Glory (Pepper has olayed three times, Unwritten Law four). In summer 2007, they were booked as the “barbecue band” on the Vans Warped Tour. In exchange for towing a large grill behind their tour bus and preparing and serving the food for 50-plus bands almost nightly, they would play every date on the tour.

“The kids say, ‘I can’t believe a teacher is going on the Warped Tour.' A lot of them have bands of their own and ask for advice and for hookups. When I first saw Jack Black in School of Rock, I said to myself, ‘Man, that’s my life up there on the screen.’”

The Rudies were asked to be the barbecue band again for the summer 2008 Vans tour. In preparation, band members quit jobs, sold cars, and gave up apartments. But trombone player Don Carter says one of the band’s key members stopped communicating with all other band members several weeks before the tour start.

“Two weeks after I lost contact with him, I called [Warped Tour founder and director] Kevin Lyman to let him know that one of the members was missing but we were going full-steam ahead and wanted to be the best barbecue band ever.”

But the missing musician continued to avoid contact with his bandmates. One member of the band blamed the player’s absence on a “meltdown.” On June 12, 2008, eight days before the tour began, Carter and Lyman knew they couldn’t count on the Rudies. Carter talked Lyman into replacing the Rudies with the Bleeding Irish, a four-piece group that relies heavily on traditional Irish drinking songs. Carter manages the Bleeding Irish.

Carter had been with the Rudies since high school. He and three others spent twelve years in the band.

“I think the Fabulous Rudies are over,” said Carter, “but some of us have reorganized and are recording for a new project.” He blames part of the Rudies’ demise on the fact that ska music has stagnated commercially.

In late 2010, the group decided to soldier on as the Fab Rudies, with Tom Voris at the helm as frontman and band manager, and with his 16-year-old daughter Kailyn Voris taking on lead vocal duties.

After signing to the Tate Music Group, they released a new eight-song album called Help Me in December 2010, with two of its songs landing on the Punk Rock High School soundtrack. The band was highlighted in the December 2010 issue of Variance Magazine, with the Goo Goo Dolls on the front cover.

Around the same time, they recorded a cover of the classic track “Tears of a Clown,” punked out for the film Beach Bar, partially filmed in San Diego. The teen comedy is the sequel to cult flick Hole In One, featuring Steve Talley and Dean Cain. In the film, co-star Ally Maki sings with the Rudies (now known as Fabulous again, rather than Fab).

Their high school-based history is the subject of the Universal Pictures film titled Music High, which co-stars members of the band. Partially shot at Mesa College and Oceanside's El Camino High School in summer 2011, the film grew out of Voris’s friendship with San Diego–based filmmaker Mark Maine. Music High is Maine’s fifth movie shot in San Diego, including Hole in One and Beach Bar.

“It all started when Mark saw a TV news story by [reporter] Jack Gates on NBC,” says Voris. “It was about the high school club I founded called Punk Rock High School.”

Maine describes Music High: “It’s about a teacher who loses his funding and who gets to teach just one music class. He deals with five different bands in that class — pop, country, heavy metal, goth, and hip-hop. The class — and the school — are divided into those genres. He tries to unify the class and the school.” A battle of the bands scenario is the climax of the film.

“This is a narrative feature,” says Maine. “It’s not a documentary, and it’s not one big music video.” But there is plenty of footage of young bands who appear to be playing live. As music director, Voris selected eight tracks that the Fabulous Rudies already recorded — five originals and three covers. Those tunes are performed (lip-synced) in the movie by the fictional Pop Squirrels. Voris also had local band Tan Sister Radio provide four songs.

In all, Voris selected the 15 titles on the soundtrack. “I got paid nothing,” he says of his input. “But I do have points. If anything big happens, that’s when the money could roll in.”