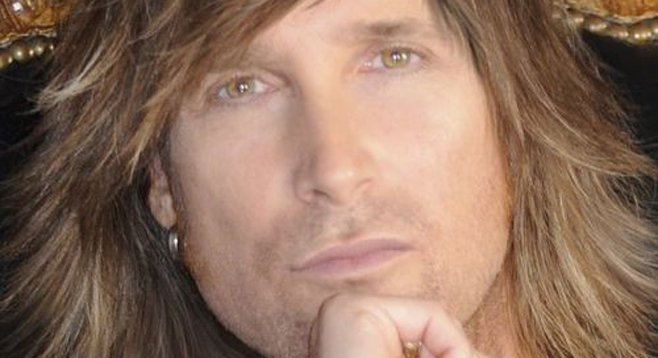 “I’m the new singer for the Bay City Rollers,” announced Eric Crabb (later known as Eric Sage) in November 2008. “Their guitarist Ian Mitchell lives in Orange County now, and he saw me on YouTube. It was an audition video I did for the Canadian band Saga, which almost got me the gig…the video stayed on YouTube and, next thing I know, Ian invited me to audition for his new version of the group.”

The actual band name is the Bay City Rollers Featuring Ian Mitchell. No other former members are in the group, and guitarist Mitchell was only a Roller from April through November 1976, though he took part in several latter day “reunion” lineups. In the early ‘90s, he was sued by former Roller Eric Falconer for unauthorized use of the band name. “Judge threw it out of court,” says Mitchell on his website, “as it was the promoter who was at fault. Spoke to Eric about it. We laughed.”

Crabb doesn’t think the lack of original Rollers will be a problem. “It’s such a famous name, and people love their music; they even had a TV show.” Crabb learned around 20 Bay City songs, as well as covers like “Rockin’ in the Free World” (Neil Young), and “Doctor Doctor” (Robert Palmer).

When a new version of their main U.S. hit “Saturday Night” was filmed at downtown’s Voyeur nightclub, a local player was recruited to appear, Justin Pearson (the Locust, ReTox, All Leather). Says Pearson, “I played in that band. But it was just the guitar player [Ian Mitchell] and a bunch of hacks, me being one of the hacks. I quit after we filmed the video for that song. And check this out, they tried to make me play a 5-string bass. WTF?!”

Crabb also fronts Livin’ on a Prayer, a Bon Jovi tribute band. “I didn’t really choose to do Bon Jovi,” he says. “A Las Vegas agent saw me performing one of their songs, and asked if I would like to do a Bon Jovi show in Vegas.” That gig lasted approximately two years, and the act still lands several bookings every month.

“We emulate the look of the modern day band,” says Crabb. “Our guitar player Steve Nickles wears some of the things Richie Sambora wears. I try to capture the vibe of Jon Bon Jovi. We have fun with it, but try to keep an edge…the music is mainly the same as on the records.”

He describes experiencing a bit of the fame and adoration enjoyed by his dimpled doppelganger. “We had a show in New York that was crazy, with a huge crowd…after a show, people in the club thought I was really Jon Bon Jovi. I got attacked by a lot of wild fans, and ended up with some torn clothes.”

At the other extreme, he recalls a dire gig from his Vegas run, at Caesars Palace. “I was with some other tribute artists, and the guy playing Alice Cooper freaked out over a problem with the sound system. He stormed out, leaving me alone backstage, with a huge living snake, while the crowd screamed for an Alice encore. The promoter asked me to do something, so I agreed to go out there and do ‘School’s Out.’”

“Before I took the stage, the promoter said ‘Take the snake!’ I said ‘Are you crazy?!’” Crabb ended up taking the snake. “One must suffer for one’s art…I’m sure that’s how the snake felt about it.”

Around 2009, Crabb changed his name to Eric Sage. Under that name, he has two solo albums: Redeem My Heart and Ain’t No Rock Stars Anymore. The first has his tune “Birthday Party Song.”

Sage also sings with a cover band called Lixx and fronts a group called Dirty Bird. In early 2013, he self-published a book, The Magic Key to Tennis: 1 Thru 10 System.