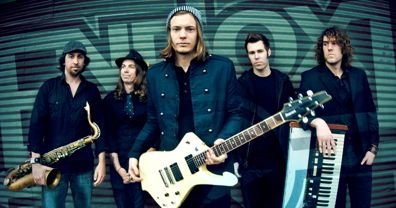 “There are many sides of Endoxi,” says singer-guitarist Chris Wilson. “There’s the Mozart got drunk on Metallica’s wine and flew to space on a rock ’n’ roll rocket ship side. Then there’s the 1940’s big-band Black Crowes meets Dave Matthews at Woodstock and lit Jimi Hendrix on fire side. Last, there’s the timeless Queen meets the late-era Beatles in Central Park for an anthemic acoustic piano-driven explosion side.”

They released the album New Blood, Old Soul in 2009. Their August 2010 album Earthbound (recorded at Studio West) came out with an all-age release party at the Epicentre on August 6 and a 21-up show at the Belly Up on August 28.

“The theme of the entire album,” says sax player Joe Cardillo, “is to find one’s purpose in life. While on the journey, you go through internal and external struggles, dealing with all the challenges and rewards that are part of that journey. This art and this album is about that journey.”

A 2012 full-length Welcome to the Good Times was made available as a regular 8-song release, or in an alternate instrumental version. However, by February 2012, singer/guitarist Chris Wilson announced that he and sax symbol Joe Cardillo would be leaving the band.

In a Facebook video, Wilson said “It’s an experience we’ve all shared over the past few years and I’ll never forget it, but I can’t personally keep putting energy into something that someone else has the power to take away from me.”

“I’m going to keep touring constantly, for the rest of my life,” according to Wilson, who says he’s going to pursue solo projects. “Joe Cardillo will be with me...sorry guys, but it’s out of our control. Kinda a 'universe won’t let ya have it' kinda thing. More songs and tours coming soon.”

“I’d like to be in Endoxi, it’s my dream, but the road has other plans. For now.” Wilson and Cardillo launched Chris Wilson & Planet Earth in 2013.