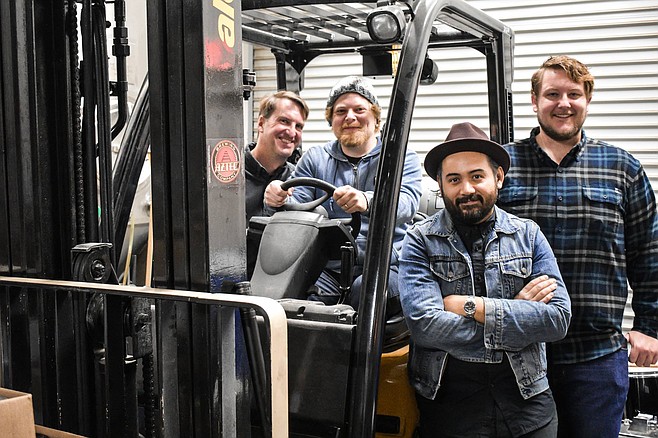 Based in Oceanside and fronted by singer-guitarist Dennis Sheridan (Skam Impaired, Blue Goat War), EndCastle is a classically futuristic, sometimes psychedelic rock 'n' roll band. "Accepting the inspiration of any worthy genre," says the group, "melodies are synthesized through dueling guitars, existential lyrics, can't stop bobbing your head bass-lines, and the rolling thunder of rhythm that ties it all together."

Their EP The Toothache was engineered and mastered at Emerald Age Studio by James Page, and released in 2018 via Vista-based Darla Records (My Morning Jacket, etc.). "I'm a transplant from Louisville, Kentucky," says Sheridan (a high school chum of MMJ’s Jim James), "and my old band Follow the Train worked with Darla years ago and had some marginal success, with two South By Southwest showcases, and some opening dates for notable bands, before life derailed us."

"The cover of The Toothache is a found-art collage of sorts that started with a painting I found on the Library of Congress website called George Washington’s Teeth," says Sheridan. "Given the fact that George Washington’s legacy is so important, I found the disturbing and unanswered questions surrounding his false teeth to be thought-provoking and inline with the subtext of these songs, which use sounds and surrealism to highlight the passive, looking-the-other-way negligence that can allow really bad things to happen, and the subject is quite immediate."