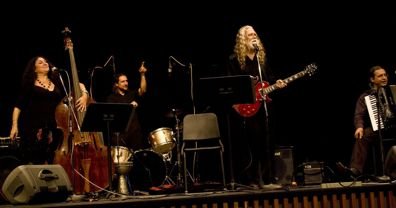 Based in Encanto, the Electrocarpathians formed in 1988 to further the fusion of East European styles such as klezmer, polka, and czardas with classic rock and Latin music. They appeared regularly at the Better Worlde Galeria until that venue closed in 1995. Their first album, Umpires of Straw, released in 2001 by Global Village Music, was subtitled Slavic Music Collected in the Midwest Performed by California Surfer Gypsy Punk Rockers. Their second release, Fighting for Harmony (2008), was fueled by a continuing search for Byzantine roots in dance music originating in South California and Tijuana.

The Electrocarpathians call themselves an “East European folk rock fusion band.” Bassist Mitchell Kaye is an astrology enthusiast who also plays with the R&B group Meteor.