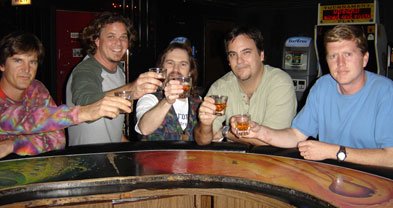 The MySpace page for the Electric Waste Band features images of anthropomorphic M&Ms surrounded by marijuana, Homer Simpson jamming on guitar with Phish beneath a pot banner, and a bleary-eyed Yoda taking a bong hit. A logo with their motto informs that they “rock the shit out of the Dead.”

The band began playing Monday nights at Winstons in OB on February 3, 1992. As of February 2011, “We figure that’s roughly 950 shows, 1900 sets, and 2850 hours of music,” said singer-guitarist Robert Harvey. By all estimates, the Electric Waste Band, a classic-rock group that features the music of the Grateful Dead, may hold the record for San Diego’s longest-running nightclub residency.

Winstons soundman Teddy Wigler has an opinion about how they have lasted so many years. “They have a following, more than any other band. People know they can come here and connect with people who are on the same wavelength.” It’s ground zero for Deadheads. But Harvey says EWB is not a tribute act. “We don’t bother ourselves with copying the Dead. We have a good time and make them our own songs to a degree.”

Has Harvey, who is an attorney by day, ever called in sick after any of those Monday nights? “I’ll call in sick.” He laughs. “We all call in sick.” Still dressed in slacks and a long-sleeve dress shirt from his day job, he says he played a part in starting the band but that he does not run it. “It’s band by committee.” He pauses to contemplate the communal aspect of his band’s membership roster. “There is no leader.” The Electric Waste Band bench, he says, runs about four deep for backup on any of the instruments. He agrees that this may be a factor that has kept them together over the years.

Harvey talks about the family feel at their shows, about all the regulars who, by his estimate, attend 80 percent of the band’s Monday gigs. “I don’t remember all their names,” he says. “A lot of them, I know them when I see them.” The names Harvey does remember include former NBA star Bill Walton and Peter Isler, a pro sailor. “He won the America’s Cup with Dennis Conner.”

Harvey admits he’s been to the least number of Dead concerts (75) among the EWB membership. He says he shifts from daytime attorney mode to Grateful Dead head prior to a show by not thinking too much. He says the goal is to “be of one mind” with the rest of the band.

That's not always easy for the other bandmembers, given the frequent audience hijinks at gigs, as noted by Paul Bell. “I once had a girl put a six-foot iguana on my keys right in the middle of my solo. She tried to drunkenly whisper in my ear about how 'nice" he was, and it took every ounce of restraint not to hurl the poor thing across the stage! After a few choice words by me, she took her scaly boyfriend back and slithered away.”