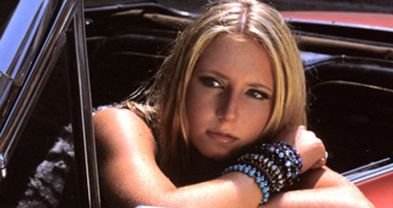 Elan is a female Latin performer based in San Diego. Her 2004 Street Child CD (sung in English) was self-written and recorded on Elan's Silverlight Records ("a home studio in my apartment in La Jolla"). The album earned the then-22-year-old two Rolling Stone en Español awards in 2004.

"Some fans who've followed me for years thought it was weird, having Slash on the record and in the video [for Street Child]," says Elan of the album's guest guitarist. "But I grew up on hard rock; the first rock concert I ever saw was Guns N' Roses in Guadalajara, when I was, like, eight years old." Elan says the Velvet Revolver guitarist "definitely likes to drink beer, he's into it! He always had one in his hand."

With her 2005 album London Express, Elan gave fans another reason to cry "what the...?" On the cover is a photo of her with her long blond mane shorn to jawline-length. "Some people act real upset. They say, 'How could you?'... I get insane fan mail. I got a letter about a pink jacket I wore to an awards show in Mexico, and it was practically a death threat if I ever wore it again. I don't want to get strangled over my fashion choices."

In August 2006, Elan filed an 11-count lawsuit against Wailers singer Elan Atias, who had begun using just the name Elan for solo recordings. “This is the kind of thing that made my brother and I start our own company,” says the local Elan. “They don’t care about music or who they hurt.” The lawsuit alleges "craft, yet overt maneuvering" to take over local Elan’s given name (which she trademarked and has always recorded and performed under) by defendants Atias, Interscope Records, and public relations firm the Mitch Schneider Organization.

The other Elan's PR company used to represent local Elan, and a link on their website that formerly led to local Elan’s site now sends users to Mr. Atias's webpage instead. Interscope Records told the Los Angeles Times’ "Calendar" section in 1999 that signing local Elan was their "second highest priority after Enrique Iglesias' new album."

“I am shocked that now, my former PR firm and a label that actually wanted to sign me, would try this,” says local Elan. “They thought they could just run us over and get away with it and we wouldn’t say anything. They were wrong!”

"If you take a look at the timing, you have to be very disappointed in how these music industry players behaved," said lawyer Matt Rifat of Manning And Marder, Kass, Ellrod, Ramirez LLP, who is representing local Elan in San Diego federal district court. “The sequence of events is unbelievable. Interscope and the Mitch Schneider Organization deal with Elan one day and the next they are slapping her name onto Atias, who never went by the one name until this year…it is as unseemly as it is illegal."