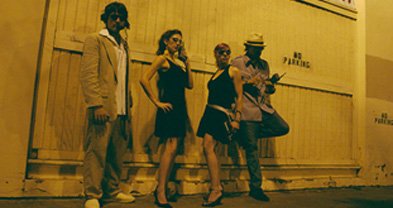 Son of a jazz guitarist, Angelo is a classically trained pianist and self taught multi-instrumentalist. He spent his teen years woodshedding with an acoustic guitar. In the tradition of his native blood he studied percussion under a sacred drummer in order to one day incorporate the secrets of clave into his own music. After a period of DJ and live PA performances in the 1990s, Angelo focused on his own music by exploring the fusion of recording random sounds with instruments, then layering them with computer-edited sequences. With no formal outline or approach, he retreated to a bedroom studio for several years.

The fruits of this journey can be heard in the indie-electronic swirlings and flamenco sketches of El Poeta's debut EP Musically Speaking, released in 2005 by the indie label imputor?.

El Poeta moved to Tijuana in the winter of 2005 and immediately joined the ranks of the RadioGlobal DJs, playing at several monthly events and collaborating with local artists. With more and more artists reaching across the international divide, El Poeta and friends formed the Borders Collapse movement -- a nonprofit organization dedicated to the cross-pollination of musical culture through a series of events at venues in San Diego & Tijuana. This has created a porthole into the U.S. specifically for cutting-edge electronic musicians from Mexico to share their music.

El Poeta is currently working on his second effort formatively titled Save Changes, an homage to the grueling lessons behind hard-drive crashes and the importance of backing up data. His live act of constantly evolving basement jams and live mash ups can be caught at various venues on both sides of the border. He can also be heard every Thursday from 2-4 p.m. on radioglobal.org for the "Like Leaves on Trees" program -- an eclectic mix of past, present, and future music.

"I actually have a mafioso in my neighborhood," says electronica artist El Poeta (Angelo Gastelum). Last month, the techno-savvy laptop whiz went freelance as a Web designer so he could concentrate on music. He and his wife moved to the Playas suburb of Tijuana.

"I wondered why all these well-dressed Mexicans at this one house would be outside drinking beer and all these Range Rovers and Mercedes and Jaguars would be there. Their house was 100 percent completely in order like a U.S. tract home. Then I finally figured out what was up when every single one of their windows was triple tinted."

Gastelum, 26, a San Diego native who has performed at the Casbah and other places around town, says he wanted to soak up TJ.

"I went for inspiration. Latin America is a very beautiful, inclusive place with cultural festivals and parties. There's also a downside. At the end of the night when everyone is drunk is when all the drama comes out. Organized crime is completely out of control."

The Imputor? Records label -- based here and in Seattle -- recently released Gastelum's Musically Speaking EP. He hopes to get his music into movie soundtracks or TV commercials. Tracks by Imputor?'s other artists have been licensed to the Discovery Channel and MTV.

When Gastelum performs live, he throws in well-known riffs from movie soundtracks and old records. When he plays the Kadan in North Park, he adds "a band and a couple of DJs." He says an aspiring laptop artist can get up and running with $6000 in computer equipment and $400 for a program called Ableton Live.

"When this laptop thing started four years ago, there was a high potential for a computer crash. It only happened to me once. It was at the end of a show. It went bub-bub-bub-bub-bub, and that was it. Everyone thought it was part of the show."