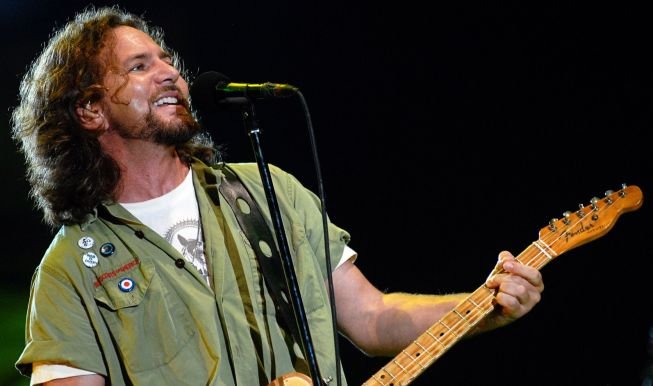 Eddie Vedder was eight when he moved to San Diego with his family, including three younger half-brothers, in 1973. While residing in Encinitas, he lived in a two-story house with a piano that he began practicing on, and his mother gave him a guitar for his twelfth birthday.

Living on his own at the age of fifteen and working nights at an Encinitas drug store, he attended San Dieguito High School until his senior year (1982), performing in school plays like Butterflies Are Free, Outward Bound, and Bye Bye Birdie. After a devastating breakup with his girlfriend Liz Gumble, he quit school and moved to Chicago, where his mother and brothers had relocated.

He returned to San Diego in 1984, along with his Chicago girlfriend Beth Liebling. Taking a job as a contracted security guard at the La Valencia Hotel in La Jolla, he also performed with several bands, including Surf and Destroy, the Butts, and Indian Style, which included future Rage Against the Machine and Audioslave drummer Brad Wilk

While living in La Mesa in 1988, he answered a Reader ad and ended up joining the band Bad Radio, who once opened for the Lemonheads at Clairemont’s Bacchanal. A surfer at the time, he was working as a security guard at a La Jolla hotel, and part-time at an Old Town gas station, when someone gave him a demo tape recorded in Seattle by Jeff Ament and Stone Gossard.

Vedder went to his girlfriend’s house and dubbed vocals onto three songs (one of them later known as “Alive”) and mailed the tape to Seattle. Two weeks later, the band that would be known as Pearl Jam invited Vedder to move to Seattle and join the group.

“If there was anything going on in San Diego with real merit, I wasn’t part of that circle,” he told the Seattle Times in 2011. “It was too close to L.A., too close to where people felt that they had to pay to play, and there was some brass ring to pull you out of that morass of no visible support for each other.”

For years, a local rumor alleged that Vedder is secretly the owner of the Casbah. The source of the rumor dates back to an incident that Casbah operator Tim Mays told Shambles guitarist Bart Mendoza, for a planned book about San Diego music history:

“He came down one night to see Jonathan Richman,” according to Mays. “He came in incognito with a floppy brim hat and a jacket, we got to talking to him, he was a really great friendly guy, very straight forward. And there were some people hanging out in the back playing pool.”

“So anyway, Eddie and I are playing pool, and I don’t know how it came up, but he said ‘If I win, I get your bar, if you win, you get my publishing deal.’ So I thought, Okay. And he beat me pretty handily. He actually beat everybody he played that night.”

“Anyway, six or eight months later I get a call from someone who said they heard on the radio that Eddie Vedder had bought the Casbah. Then I got more phone calls. Apparently, and I just found this out recently, Mike Halloran told Marco Collins [ex 91X DJ, then at Seattle radio] the story, so Marco Collins put the story out there and it got picked up. Needless to say, when Eddie comes in, we take care of him, just so he doesn’t call in his note.”

Vedder’s video for “Longing To Belong,” the first single from his solo album Ukelele Songs (released May 31, 2011) mixes hi-def footage with images from super 8 tape, to provide a serene Hawaiian backdrop for the ballad. A video for “Can’t Keep” from his new album Ukelele Songs covers a song originally appeared on Pearl Jam’s 2002 release, Riot Act.

While playing the David Letterman Show on June 20, 2011, Vedder paid tribute to the late Clarence Clemons by painting the fallen E Street Band member’s first name on his stage mandolin. Later that summer, a collaboration track between Vedder, Joshua Homme, and the Strokes was included in a compilation album to benefit homeless youth.

Famous former neighbor Cameron Crowe (Almost Famous) debuted his documentary Pearl Jam Twenty on PBS on October 21, 2011. The next night, Vedder did an acoustic solo performance at Neil Young’s 25th Anniversary Bridge School Benefit Concert, which was taped for streaming online. He was joined on a couple of songs by Beck and Regine Chassagne from Arcade Fire. At the same time, he was reportedly fighting to regain control of the web domain eddievedder.com, which was mistakenly allowed to lapse and be taken over by other parties.

In early 2012, he postponed his 15-city U.S. solo tour due to temporary nerve damage in his right arm, the result of a back injury sustained earlier that year. Shows were originally set to start April 10 in Las Vegas. He then announced summer dates for a 2012 solo tour of Europe and the UK, kicking off in Amsterdam on July 25 and wrapping up with a performance at Sudoeste Festival in Portugal on August 3.

A new song “Skipping” appears on the 2012 compilation called Every Mother Counts, only available at Starbucks from May 1 to May 29 “to celebrate Mother’s Day.” 13 of the 19 songs are previously unreleased.

On June 24, 2012, he jammed onstage with Tom Petty and the Heartbreakers in Amsterdam at the Heineken Music Hall, singing with Petty on “The Waiting” and “American Girl.” Later that year, new video for “Sleeping By Myself” (off Ukulele Songs) began streaming online, featuring footage of a ukulele being built. His Autumn tour with opening act Glen Hansard wrapped up in Clearwater, FL during the first week of December 2012.

Also in December, Vedder hosted a new, limited-run show on SiriusXM's Pearl Jam Radio channel, the Eddie Vedder Radio Show, which premiered on December 5 on Pearl Jam Radio, channel 22. He played many of his favorite songs, from early punk rock influences to unreleased material from his personal archives. The program also featured Vedder discussing his musical influences and contemporaries who inspire him, as well sharing personal stories about his career in rock music.

Pearl Jam's 2013 album Lightning Bolt debuted at number one on the Billboard 200 album chart in October with opening week sales of 166,000 copies. For his Australian solo tour in February 2014, he played in Perth, Sydney, Melbourne, and Brisbane.

He played several solo shows in Brazil in May 2014, including São Paulo's Citibank Hall and Rio de Janeiro's Citibank Hall, before rejoining Pearl Jam for a European tour in support of their latest album Lightning Bolt, beginning in Amsterdam on June 16. In May 2015, Vedder was the final musical guest on David Letterman's late night talk show, performing with Paul Shaffer and the CBS Orchestra.

Spring 2017 saw the longtime Chicago Cubs fan making a guest appearance in a Major League Baseball commercial for the team, promoting the new baseball season. The following year, he played a series of solo dates for a summer tour of Europe.