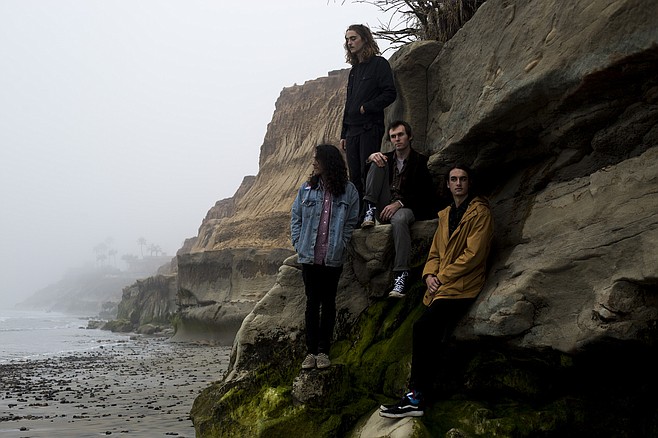 Based in Oceanside, Düüns is a psychedelic rock band formed in 2016, featuring North County natives Marc Montez, Mikey Sykes, Nathan Gentry, and Luke Cottrell. Coming of age together listening to the likes of CAN, the Velvet Underground, and Pink Floyd, Düüns is informed heavily by reflection of the past, and a limitless desire to explore the future.

"Our first gig ever was for this DIY festival in the desert near Joshua Tree called Gran Roca, back in 2016," says singer-bassist Luke Cottrell. In 2016, the quartet recorded their Saturated EP over three nights straight to tape on a Tascam 388 at Lavender House Records in Vista, with all members alternating instrument positions for each song. After its release, they were joined by Alex Garcia.

A new single appeared in April 2018, "Escape/AWOL," previewing their album U.S.S. Death Express, which sports a cover painted by singer-bassist Luke Cottrell. "As far as the theme of the album and its title and artwork, it's an impression and reflection of a period of our lives before and during the creation of our music. It's about overcoming a general sense of frustration, discontent, hopelessness and helplessness towards life, about growing up and realizing what it takes to survive in this world; the seemingly endless monotony of school and work, and diverting the energy from futile attempts to escape a loathsome life towards embracing and enjoying the experience of life and opening the mind to a brighter future."