The Dukes of Haggard 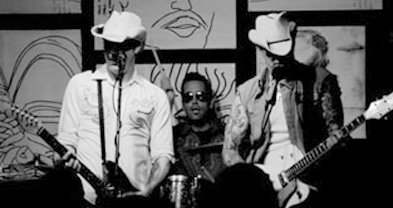 RIYL: The Shot Out Hoods, the Suicide Kings, the Cutthroats

Current Status: "On hiatus" according to MySpace page.

Influences: The Blasters, the Pleasure Barons, Cash'd Out, Shot Out Hoods, the Suicide Kings, the Cutthroats, Redeye Gravy, Unregistered Sex Defenders, the Supersuckers, Southern Culture on the Skids

"I insult women, homosexuals, and drug addicts...especially tweakers. They are at the low end of the food chain," says Mike Hood, who admits he's a recovering addict.

After playing guitar for years with the Shot Out Hoods, the Suicide Kings, the Cutthroats, Redeye Gravy, and Unregistered Sex Defenders, Hood says, "I'm 54, and I don't know how much longer I can be a rock-and-roll star. I'm moving into comedy."

In his 2005 band, the Dukes of Haggard, Hood insults audience members between songs about large women and bike-riding meth addicts. He writes all the words and music for the band: "Down in San Diego none of my friends say they're gay/ But every year there's another million at that rainbow parade."

"We're just making good fun at how fucked up our society has become.... I'm not leaving myself out [of the insults]."

Hood says the Supersuckers and Southern Culture on the Skids inspired him to move into comedy. "So many bands are so moody, so serious. They just stand there and stare at their feet. I talk to the audience."