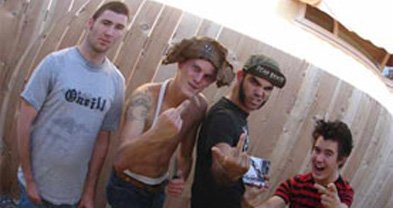 Sound description: blink-182 style wackiness, not unlike the band Blotto (if you remember their spoo tune "Metalhead"), played fast and furiously, like ska punks covering Sabbath.

“A Duff is a Designated Ugly Fat Friend,” says Duff-O-Cide guitarist Scott Gawlik. “They are most commonly spotted within a small group of girls hidden behind a large burrito or super-sized meal. They have a violent temper and must be approached with extreme caution. They get drunk and occasionally hook up with average people. Duffs, beware: This group will no longer tolerate awkward, hung-over mornings waking up next to you...Duff-O-Cide is a union of concerned citizens with a shared goal of spreading awareness about the Duff problem in San Diego, through the use of power chords and guitar distortion.”

The band has released three CDs: Demos I, Demos II Supersized, and Demos III WorkOut Tunes. They sometimes get in trouble over their guerilla marketing techniques.

“Parkway Plaza’s slightly overzealous mall security apparently thinks there’s something dangerous about guys handing out free CDs and flyers,” says bassist Jay Sassin. “We were giving out our Don't Munch a Duff EP, and there was no crowd, really. It was about 8:30 [p.m.], and we were walking around handing them out for about half an hour. When we stopped to get a drink of water, this security guard asked us if we worked at the mall, and we said no. Then he asked if we were selling our CDs, and I said, ‘No, they’re free. Do you want one?’ He snapped back with a no and then radioed to what he called dispatch.... We had to leave the property immediately. He walked behind us as we left, handing out a couple more demos before we got to the door.”

Duff-O-Cide is used to pissing people off, given their name, their lyrics, and posts like this on their MySpace page:

“By spreading awareness and educating the people of San Diego about this growing [Duff] concern, the members of Duff-O-Cide hope to decrease the Duff-to-average-male hook-up ratio and eventually eliminate Duffs altogether.”

One angry e-mail response to the posting stated “Your page is hateful and hurtful. Please take some time and really think about this...Something tells me that you mean exactly what you say.”

Lyrics to the song “Don't Munch a Duff”:

“Designated ugly fat friend/ your sexual fun has come to an end/ Don’t think of her as a lunchable/ because a Duff is not munchable.”