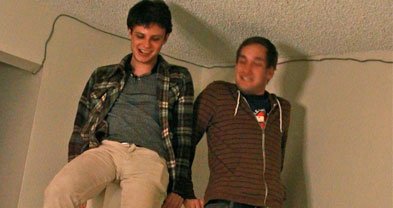 “My first band that wrote original songs and played shows was basically an At the Drive-In rip-off,” says singer/guitarist Ryan Solomon. “I guess I wanted an excuse to be angsty and jump around like a maniac onstage. I learned the hard way that an audience doesn’t really care about an energetic visual performance if the music sounds sloppy and horrible.”

“In high school, it was super cool to play at the Scene [now closed] and Club Xanth [also closed]. We also let Soma rip us and our friends off a handful of times. After that, I fell in love with the Ché Café and played a bunch of shows there.”

Featuring players from Da Bears, D/Wolves, and TV Girl, DUDES is an electronic rock project founded by Solomon, formely of Da Bears. Using guitar and drum loops, he builds new music with a trippy prog-rock edge. The band debuted on New Year’s Eve 2010/2011, at the Tin Can Ale House.

“I was so stoked not to have band practices and shows for a few months,” says Solomon. “But I still had to record.”

Detuning the guitar to C# (the tuning used by Black Sabbath’s Tony Iommi), DUDES find an aesthetic ranging from dark psychedelic ’60s groups like Aphrodite’s Child and Uriel/Arzachel to a more ’verby vox and beat sound in the vein of Memory Cassette or Wavves (fronted by Joel Williams’ older brother Nathan).

In early 2011, DUDES released a free EP (actually, a collection of songs floating around on the Internet for the past few months) called AV Club on their Bandcamp page.

Released in summer 2011, Narcissists Anonymous EP was introduced with a free digital download of six songs, as well as a vinyl release. The EP was promoted with several videos, homemade by Binns, though you’ll have to navigate through Canadian indie rockers the Dudes and a few Big Lebowski compilations to find them on YouTube.

“That’s where I go if I want to hear a song,” says Solomon. “I’ve been getting into bands through YouTube channels.”

Another tie-in with the EP is a DUDES video game. “Like, we’re the first people to do this,” laughs Solomon.

“At around the same time we were working on the EP I found this program that I used to use back in the day where you could make your own custom games...it’s kinda like Pokemon, but it’s DUDES, and DUDES are all poor, and we took some magic mushroom herbs or something and we have to battle our way out of a cave.”

He says the game has built-in surprises. “Like, if you find a little hidden chest you’ll get a download code for a new song.”

As of the release of Narcissists Anonymous EP, E.J. Binns says “Our lineup is still the same but has been hectic with Joel joining TV Girl in addition to D/Wolves, Paper Forest, and his KYNAN solo project. We have a couple new videos up, one including [fellow DUDE] Ryan taking a bong rip, JOOSE sip, and whip it before putting on a bunch of make up.”

In April 2012, the band posted a collection of unreleased songs and recorded conversations on Bandcamp under the title #RARE.

“#RARE. is a collection of song islands and candid skits birthed in my room,” says Solomon. “They were scraped from the depths of my hard drive and molded into the imperfect lump that you see here. Most of the songs are late night experiments. One-take-jake jams. The skits are taken from various conversations where its participants may or may not have known the microphone was hot. Thanks to all my friends for letting me use their voices without permission! This record in whole represents the last year and a half for me.”

The collection also includes a few tracks the band made for the 2011 Folgers Jingle Contest, which they failed to win. “Swag-rock is all about, you know, being cool and being good, talented, relevant,” Soloman told music blog Synconation. “But not really trying too hard. Pavement was probably the first swag-rock band in my opinion. The guitars might not be strummed exactly in time, and some of the vocals might be a little sketch. But overall swag-rock is much more expressive than regular rock.”

Later in 2012, they released their Summer Vacation EP via E.J. Binns’ Grizzly Records, featuring their revised lineup: Ryan Solomon, bassist E.J. Binns, and Matt Billings on keyboards. That year, they were nominated in the Best Electronic category at the San Diego Music Awards.

“Anyone who’s ever listened to a full release of ours or seen us live wouldn’t categorize us as electronic, so I think it goes to show how fickle the whole concept is. At first, we shrugged the nomination off, but then we decided to embrace it and take some shots at the whole thing. We made a silly campaign video, but unfortunately it wasn’t enough to push us to the top. Spoiler alert: the whole thing is rigged.”