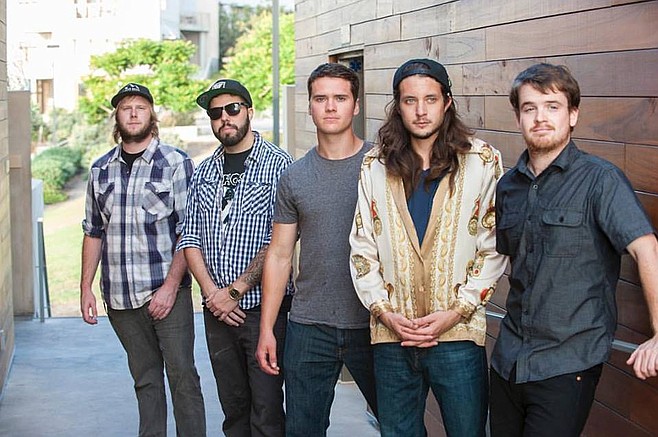 The group has built a large following with live shows and touring, but sometimes the fans are outnumbered by, well, non-fans. "I'll never forget our worst show," recalls Andrew MacKenzie. "We played a small bar called House Of Buds in Hyannis, Massachusetts. Our guitarist Cory couldn’t make the show, and I had to borrow his practice amp for the three hour set. This was back in 2011 when we barely had enough material for a two hour set, so we would find ourselves jamming and vamping on tunes for about ten minutes too long. The people coming in and out of the bar did not take kindly to that either."

"We had one guy who would repeatedly walk over to the karaoke machine and mimic putting a dollar bill in if we didn’t play something more modern and popular. At the same show, a woman who was there with friends kept putting her finger to her head as if she were pulling the trigger of a gun to shoot herself, repeatedly! That was truly insulting, since we were young guys not used to such a harsh audience reaction."

Their 2015 album Light Flashes was produced by Craig “Dubfader” Welsch of 10 Ft. Ganja Plant. After its release, they relocated to San Diego in 2016 and recorded their Live at the Belly Up full-length, with guest players Erik Wainwright (percussion) and Derek Brown (keyboards).

"The Belly Up album art is a new interpretation of the artwork for Light Flashes," says MacKenzie. "We realized that, since we made the shift over to the east coast, why not rework the old cover into a more west coast friendly design. There has also been talk of putting out live albums as much as possible, so we are looking into the idea of continued installments of the artwork, with the scenery matching the show location. We incorporated palm trees, sand, sunshine, and the beach to represent the new scenery that we've placed ourselves in."

Live at the Belly Up debuted at #4 on the iTunes Reggae Chart on November 25, 2016 and was nominated by the 2017 San Diego Music Awards in the Best World Music Album category. Their 2017 Right Direction Spring Tour was launched in San Antonio on May 2, moving east to Florida, up the coast to their hometown of Boston and ending June 3 in Tucson, AZ.