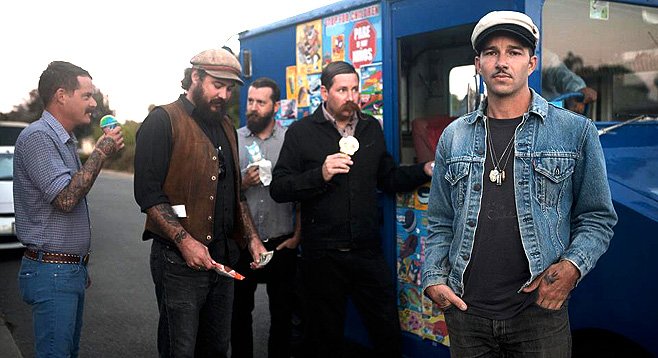 The Drowning Men are five long-time San Diego friends, most of whom have grown up together and been in various bands with and without each other over the last 15 years, from fast punk to traditional Irish folk bands.

The founding core -- multi-instrumentalist singer Nathan (aka Nato) Bardeen, drummer Rory Dolan, and guitarist James Smith -- met in grade school in Oceanside. They had a long history of garage jamming. Before DM came together, Bardeen played in the Plug Uglies. When that band imploded, he went looking for his childhood bandmates to start something new. It was the right time for the melding of their Tom Waits–Nick Cave influences.

The group experiments with their multi-flavored musical influences, blending folk and roots Americana with sing-along sea shanties and pirate chants, with side forays into Eastern European ethnic folk delivered with the rhythmic complexity of a Brecht-Weill opera.

“I love theatrical melodies and swells, and the purity of folk music from around the world”, explains Bardeen, the main lyricist and songwriter, whose personal influences include Tom Waits, Leonard Cohen, and the bleak poetry of Nick Cave, whose novel And the Ass Saw the Angel inspired the band’s name.

Their 2009 album The Beheading of the Song Bird, produced by Pall Jenkins of San Diego’s Black Heart Procession, has the timeless conceptual feel of such contemporaries as Arcade Fire, the Decemberists and My Morning Jacket, blending folk and roots Americana with sing-along sea shanties and pirate chants, with side forays into Eastern European ethnic folk delivered with the rhythmic complexity of a Brecht-Weill opera.

After touring in 2011 with Flogging Molly, that band signed the Drowning Men to their Borstal Beat record label, with plans to reissue The Beheading of the Song Bird. Later that year, they toured with the Airborne Toxic Event, releasing a tour video featuring road footage set to their song “Rita.”

“We played more than 130 shows in 2011, touring the U.S. and Canada with some absolutely amazing bands and crews,” says Bardeen. “We met so many incredible people, many of whom let us eat their food, sleep on their floors, and ultimately helped us get by on the road. Now, we’re just excited to be on tour, see those people again, play these new songs, and be in this band.”

Then there was the night of November 18, 2011, when another driver hit (and totaled) their van and trailer in Connecticut, while the band toured with the Airborne Toxic Event. They finished the tour by hitching rides with the headliners.

A new full-length was released in July 2012, All of the Unknown, on the Borstal Beat label, produced by Billy Mohler, with guest players including Anna Bulbrook from the Airborne Toxic Event, who played strings on the song “Fix Me Love.”

Bardeen is reluctant to reveal the inspiration behind the title of All of the Unknown. “When bands or artists spill the beans, you kind of lose the magic and illusion of the aesthetic. To us, that defeats the purpose. It’s more interesting to hear others' interpretations. After all, if you found out a song that helped you through a really tough time in your life is really about a hamburger, you’re gonna be pretty bummed.”

In early 2012, the group shot a video for “Lost in a Lullaby,” directed by band bud Ryan Renteria. Says Bardeen, “He’s been on the road with us since we first started playing shows and touring. He made the video for ‘Disorder, Here We Come’ from our first EP Kill the Matador, and he also made the video for ‘More Than This’ from Beheading of the Songbird.”