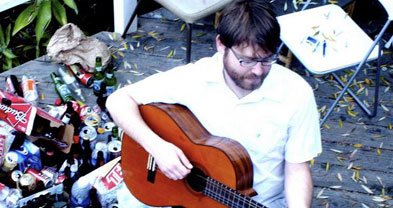 Andrews says the album came out of "Discovering my adoption, and my supportive parents' guidance in finding my roots. Roots that came to light in Sven-Erik Seaholm, a songwriter/producer who never know he had fathered a son - and, as it has been for over 10 years time, like most recorded projects I've ever done, Sven and I co-produced Only Mirrors together, combining our talents again for what has become our favorite collaboration."

Andrews spent the first half of 2010 touring with the Album Leaf. However, after eight years with that band, they parted ways. A solo EP Playing Birthday Games was released in October 2010. The physical copies sold on his subsequent tour included handsewn DIY-style packaging, plus two bonus tracks not available digitally.

In September 2010, Andrews won Best Electronic at the San Diego Music Awards. Shortly after that, he announced his engagement to Sarah Lee Longville, who he married in summer 2011.

In July 2012, Andrews released a new full-length, Goddamn, Yes I’m For Real. His novella the Shepherd’s Journals was published by Portland's Blue Skirt Productions in March 2015.