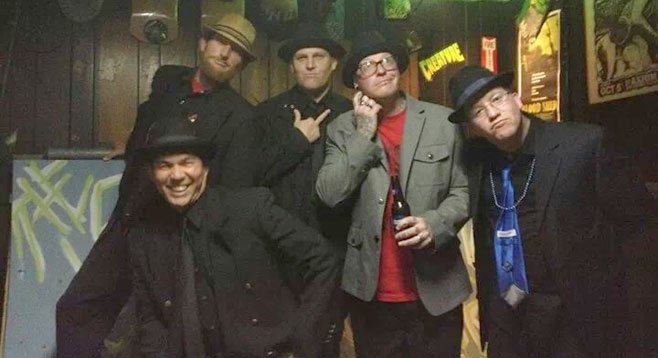 RIYL: The Gizzards, Vegitation, Battalion of Saints, Homeless Sexuals, Behind the Wagon, Castoff

D.P.I. (Drunkin’ Punkin’ Idiots) are based in Ocean Beach. “D.P.I. started in April of 2002,” says original bassist James Herrault. “I was the manager at a skate surf shop in O.B. called Pride. Our lead singer worked there, and all we listened to was late-1970s and early-1980s punk. One day he says to me, ‘I’m starting a punk band!’ I said I used to play bass when I was 12.”

“We went over there and wrote our first two songs...I couldn’t play bass worth shit. The drumming and singing was carrying us along. But we still didn’t have a guitar player...the first shows were house parties and, if you were fortunate to be there, you saw some insane shit. Absolutely packed like sardines and D.P.I. girls almost naked, dancing around like psycho go-go dancers while the pit was cranking.”

As of 2013, the band included singer Mike Vetter, singer/guitarist Joshua Davis, aka Joshy Watrel, of the now-defunct local band the Wastrels, brothers Kelly and Jon Dean on drums and bass, and guitarist TK Londis.

Asked about their worst gig, Wastrel recalls "Probably our show up in Redondo Beach a few years back. Our bassist at the time was really stressing how important this show was. Throughout the night, he kept reminding us while pointing out that there were a few 'important' people watching, as if there was a contract ready to be signed or something. The rest of us didn't care, we knew our capabilities. So, two songs into the set, I can hear our bassist playing nonsense because he is so drunk he can't even stand. He played one note the whole set. I was pissed! It was embarrassing. I hate sounding like crap."

Their full-length Smashed saw its hard-copy release in January 2014. Around the same time, singer Mike Vetter announced his candidacy for mayor of San Diego.