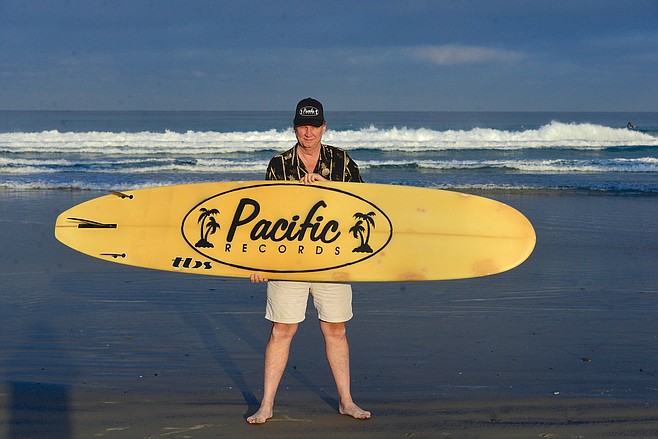 Influences: Goffin and King, Boyce and Hart, Lennon and McCartney

Classic-rock songwriter Douglas Foxworthy graduated with a BA from SDSU specializing in Telecommunications. He has 6 gold albums, 2 gold singles, and more than 38 record releases in over 32 countries to his credit, with sales of over 20 million records to date. He co-wrote “His Other Woman,” the B-side of “This Girl Is a Woman Now,” which was a top-ten hit in 1969 by locals Gary Puckett and the Union Gap.

“My first check was for $60,000,” says Foxworthy. “The royalties are the same for the A-side [songwriters] as with the [writers of] B-side [songs on 45-rpm vinyl]. Of course, they don’t have B-sides anymore.”

Foxworthy says that he has since written major-label material for other bands, royalties from which have netted him over a half-million dollars. The revenue helped him launch his Kearny Mesa-based Foxworthy Records. After seven years, his label notched its first national chart hit in 2007 — a dance remix of “In the Mix” by local singer Mandy Gasparich, aka Miz Mandy.

The song hit #37 with a bullet on Billboard’s dance club play chart in mid-2007. “We hired record promoter Brad Lebeau, who first broke Madonna in dance clubs in 1983,” says Foxworthy. He details the strategy to make Miz Mandy a household name.

“Dance club hits typically don’t make any money. Our game plan is to break it on the dance charts, then get her on Latin pop, which is the next-easiest chart to break through. Then we want to break her on straight-ahead pop.” Foxworthy says this plan will enable him to work around the fact that he doesn’t have the promo cash it usually takes to break a new artist.

Although Miz Mandy is not of Latin descent, the song was produced with Latin rhythms, flamenco-guitar flourishes, and backup lyrics done in Spanish by Cardiff producer Pat Pickslay. The extended remixed dance version that charted was crafted by DJ Scotty K, who is known for the remixes he’s done for Christina Aguilera, Seal, and Madonna.

“We need a new dance diva,” says Pickslay. “When disco started, it was such a strong movement. I see an opening for someone to take that flag and raise it. Avril Lavigne is the pop-rock diva. We need a dance diva. There is a vacuum right now.”

Foxworthy is also the creator and founder of the San Diego Walk of Fame, which he describes as “a tribute and visual showcase to those people in the arts and sciences that have made a difference in our lives, here in San Diego and in the global village.” He served as COO for local label Pacific Records, based on Sports Arena Boulevard.

Foxworthy passed away in late 2017.